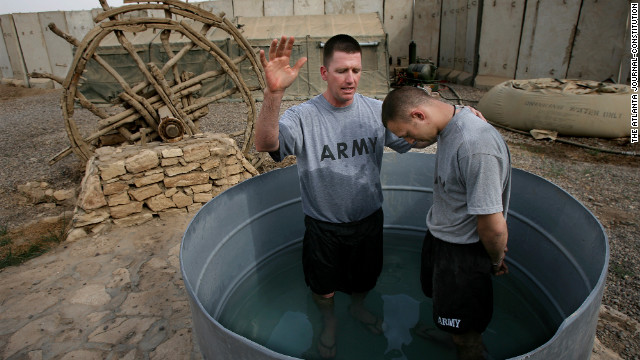 Army chaplain Darren Turner, left, wound up quitting the Army for a spell after returning home from Iraq.
May 28th, 2012
09:15 AM ET

Atlanta, Georgia (CNN) – Darren Turner insisted on going to war, even though the Army usually reserves desk jobs at home for new chaplains like him.

Turner was young and green, enthusiastic about taking God to the battlefield. The Army captain had learned that people in pain are often wide-open to inviting God into their lives.

Jesus always ran to crises. Turner was going to do the same.

He’d enrolled in seminary in 2004 at Regent University in Virginia, founded by evangelist Pat Robertson. And early in his spiritual journey, he was inspired by Christian writer John Eldredge, who suggests that American men have abandoned the stuff of heroic dreams, aided by a Christianity that tells them to be "nice guys."

God, says Eldredge, designed men to be daring, even dangerous.