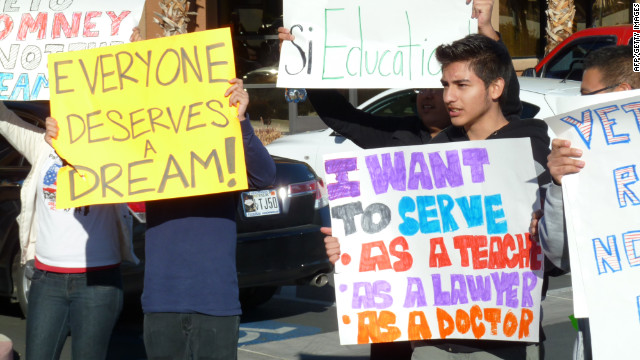 Was the decision about political posturing to win over certain groups? END_OF_DOCUMENT_TOKEN_TO_BE_REPLACED 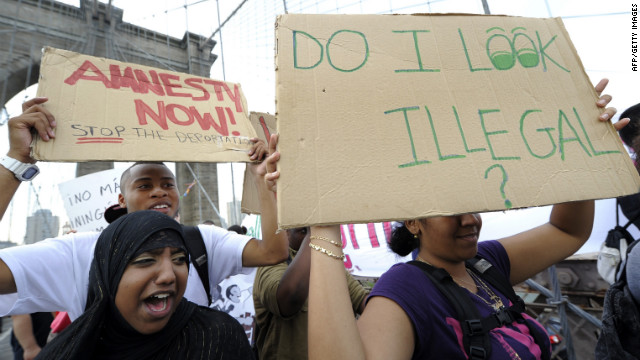 A coalition of immigrant groups and their supporters march across the Brooklyn Bridge in New York in July 2010.
June 15th, 2012
02:42 PM ET

Editor's note: How does this affect you? Share with us on CNN iReport.

"It's just insane," the graduate student at Texas A&M University said. "I've been working on this for six years. It is just overwhelming."

Zelaya was electrified by news that the Obama administration will stop deporting illegal immigrants who entered the United States as children if they meet certain requirements.

Zelaya came to the United States illegally from Honduras at age 14 to find his mother, who was already in the country, he said.

Without the change announced Friday, he couldn't get a job to help pay for school; Zelaya, 25, is pursuing a master's degree in education with hopes of earning a doctorate and teaching middle school. He also wouldn't be able to consider job offers that presented themselves afterward. The uncertainty over what loomed after graduation spooked him.

"Now, maybe I will be able to work without being afraid that someone may deport me," he said. "There is no fear anymore."

News of the change raced across the country, buoying the spirits of immigrants and immigrant advocates who have campaigned for such a change for more than 10 years.

Tune to "The Situation Room with Wolf Blitzer" at 4 p.m. ET on CNN for Blitzer's interview with Secretary of Homeland Security Janet Napolitano.

Washington (CNN) - In an election-year policy change, the Obama administration said Friday it will stop deporting young illegal immigrants who entered the United States as children if they meet certain requirements.

The shift on the politically volatile issue of immigration policy prompted immediate praise from Latino leaders who have criticized Congress and the White House for inaction, while Republicans reacted with outrage that the move amounts to amnesty - a negative buzz word among conservatives.

The Pentagon, where homosexuality was cause for discipline until recently, will hold a Gay Pride Month event in June.
June 15th, 2012
09:39 AM ET

Washington (CNN) - The Department of Defense announced Thursday that it will be commemorating lesbian, gay, bisexual and transgender pride later this month. The event will be the first of its kind for the Pentagon.