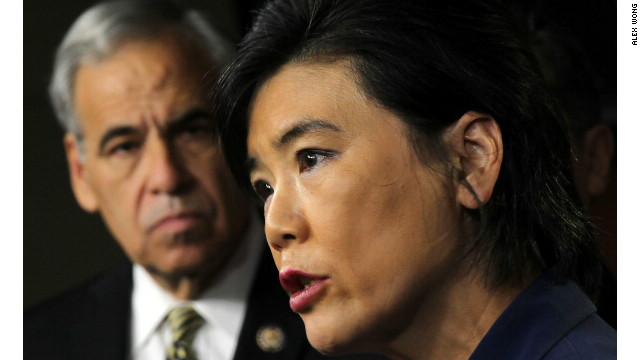 (CNN) - The United States has apologized to African-Americans, Japanese, Native Americans and Hawaiians for wrongs in the name of government. Now it has made that rare apology to Chinese-Americans for discriminatory laws adopted 130 years ago.

The House of Representatives passed a resolution Monday expressing regret for the passage of the Chinese Exclusion Act, which imposed severe restrictions on Chinese immigration and naturalization and denied Chinese-Americans basic freedoms because of their race.

The apology reverberated across the nation and the Pacific.

"We have made history!!!!" read a news flash on the website of the Chinese American Citizens Alliance. And the story was carried by Xinhua, China's state-run news agency.

The House regret came on a resolution sponsored by Rep. Judy Chu, D-California, who is the first Chinese-American woman elected to Congress.

For Chu, the apology was deeply personal.

"It is for my grandfather and for all Chinese-Americans that we must pass this resolution, for those who were told for six decades by the U.S. government that the land of the free wasn't open to them," Chu said on the House floor.

"We must finally and formally acknowledge these ugly laws that were incompatible with America's founding principles," she said.

She told her fellow lawmakers how her grandfather did not have the legal right to become a citizen, how he was forced to register and carry a certificate of residence at all times for almost 40 years, or else face deportation. He could be saved only if a white person vouched for him.

Chu said the Senate "did its part to right history" by passing its own resolution last October. She implored the House to do the same.

The Chinese came to America, as do all immigrants, searching for a better life.

"Their blood, sweat and tears built the first transcontinental railroad, connecting the people of our nation," Chu said. "They opened our mines, constructed the levees and became the backbone of farm production."

But as the economy soured in the 1870s, Chu said, the Chinese were made scapegoats.

"They were called racial slurs, were spat upon in the streets and even brutally murdered," she said.

They were known as the "Mongolian horde," and on April 17, 1882, the House passed the Chinese Exclusion Act, signed by President Chester Arthur.

Over the years, the act became more discriminatory, scarring many generations of Chinese-Americans. It was repealed in 1943 after China became an ally in World War II.

Congress has issued apologies to groups of people before, including to African-Americans for slavery, to Japanese for internment camps, to Native Americans for violence, neglect and mistreatment, and to Hawaiians for the overthrow of their monarchy.

"This is a very significant day in the Chinese-American community. It is an expression that discrimination has no place in our society and that the promise of equality is available to all."