Sometimes a shoe is just a shoe. And art is just a creation. But the choices artists or brands make can have an unintended subtext. And these decisions sometimes create a firestorm of public outrage, especially when certain images conjure up painful stereotypes from the past.

When a photo of an Adidas sneaker, dubbed the JS Roundhouse Mids, was posted on the company's Facebook page with the line, "Got a sneaker game so hot you lock your kicks to your ankles?" sneaker enthusiasts reacted strongly.

"Wow obviously there was no one of color in the room when the marketing/product team ok'd this," said a commenter, identifying herself as MsRodwell on nicekicks.com.

For some, the photo of a sneaker with affixed rubber shackles immediately brought up thoughts of chain gangs. For others, it was the painful reminder of slavery.

"The attempt to commercialize and make popular more than 200 years of human degradation, where blacks were considered three-fifths human by our Constitution is offensive, appalling and insensitive," the Rev. Jesse Jackson said in a statement Monday.

After the public outcry, Adidas decided to pull the shoe.

The man behind the design responded days after the controversy broke. Jeremy Scott said it was never his intention to provoke that kind of response. His design, he said on Twitter, was inspired by a childhood toy. 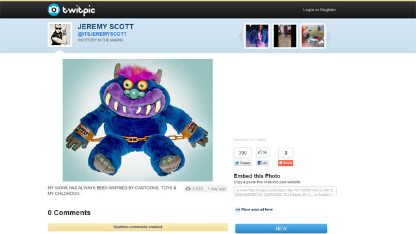 Designer Jeremy Scott tweeted a toy was his inspiration for the Adidas shoe.

Now the public often reacts long before a product makes it to market. People increasingly are making their voices heard and in effect becoming a focus group all their own, leading to a battle over whose interpretation matters - the artist's or the public's?

When do we become outraged about an artistic decision made by a company in an ad or for a product? And is it helpful for the public to keep companies in check from going too far, or are we too quick to respond?

Let us know what you think in the comments below.