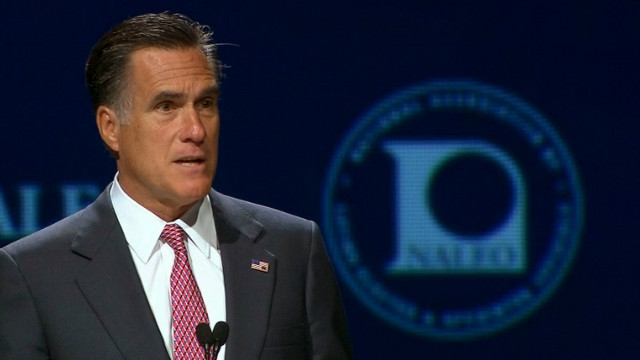 Mitt Romney, the presumptive Republican presidential nominee, would be the first Mormon president if he won.
June 21st, 2012
07:00 PM ET

(CNN) - Bias against a Mormon presidential candidate hasn’t budged in 45 years, with 18% of Americans saying they would not vote for a well-qualified candidate who happened to be Mormon, according to a Gallup Poll released Thursday.

The survey points up potential challenges for presumptive Republican presidential nominee Mitt Romney, who is vying to be the first Mormon in the White House.

Gallup first asked Americans about support for a Mormon presidential candidate in 1967 when Romney’s father, George Romney, was running for president. That year, 17% of Americans said they would not vote for a well-qualified Mormon for president.

The audio of the February 26 interviews, made public late Wednesday, is part of discovery items released by Zimmerman's defense team. The recordings represent the first time Zimmerman is heard giving his account in his own words.

Also released were audio and video showing the techniques used by the police department in the investigation: interviews conducted in the days after the shooting, a video of a voice stress test administered to Zimmerman by police and his videotaped re-enactment of the incident for authorities.

Zimmerman, 28, is charged with second-degree murder in Martin's February 26 shooting death. Zimmerman has said he shot Martin in self-defense, but Martin's family and civil rights activists across the country said Zimmerman, who is white and Hispanic, racially profiled Martin and ignored a 911 dispatcher's advice not to follow him.

NEW YORK (CNNMoney) - White Americans have 22 times more wealth than blacks - a gap that nearly doubled during the Great Recession.

The median household net worth for whites was $110,729 in 2010, versus $4,995 for blacks, according to recently released Census Bureau figures.

The difference is similarly notable when it comes to Hispanics, who had a median household net worth of $7,424. The ratio between white and Hispanic wealth expanded to 15 to 1.

The gap between the races widened considerably during the recent economic downturn, which whites weathered better than blacks, Hispanics and Asians.

The latter three groups saw their median household net worth fall by roughly 60% between 2005 and 2010, while the median net worth for white households slipped only 23%.

This allowed whites to leap ahead of Asians as the race with the highest median household net worth.