(CNN) - Karen Klein is probably not the first face that comes to mind when you think of a poster child for bullying.

Yet there she was, sitting in the back of Bus 784 as it rolled through the streets of Greece, New York, on Monday afternoon. Four middle school boys barraged her with verbal abuse, jabbing her about her weight, attacking her family and chuckling as they made violent and graphic threats. Except for a few even-keeled retorts, the 68-year-old bus monitor brushed sweat from her brow and remained quiet, peering up front and out her window, seemingly waiting for her hellish ride to end.

Her suffering may have gone unnoticed had not one of the young teenagers posted a 10-minute video of the harassment on YouTube.

By Wednesday, police were interviewing Klein and her alleged verbal abusers. And by the next day, as the video began going viral, she had become a cause célèbre.

Her torment became a prism through which total strangers the world round characterized her experience as symbolic of everything wrong with modern-day parenting, children and more. Beyond anger, some expressed sadness for the seemingly defenseless older woman who, they felt, bravely suffered the slings and arrows flung at her for no good reason at all.

After more than a decade, Janet Evans plunges back into competition

Huntington Beach, California (CNN) - It's dark. Sunrise is still more than an hour away as Janet Evans tucks a last strand of dark hair beneath her latex swim cap.

"This is the hardest part," she says as she stares into the blue light reflected up out of the pool and prepares to plunge into another day of exhausting training. By day's end, Evans will have logged up to 10 miles in the pool and 45 minutes of intense training in the weight room.

Her goal seems an impossible dream, an Olympic comeback after 15 years in retirement. She will compete in U.S. Olympic Trials in the 800-meter freestyle next week.

At 40, Evans still retains the effervescent smile that warmed the nation's heart so long ago. Gone is the pixie haircut. It's been replaced with a more sophisticated shoulder-length style more fitting a busy post-retirement career as a wife, a mother of two, an Olympics booster and a motivational speaker. She is currently representing Metamucil. 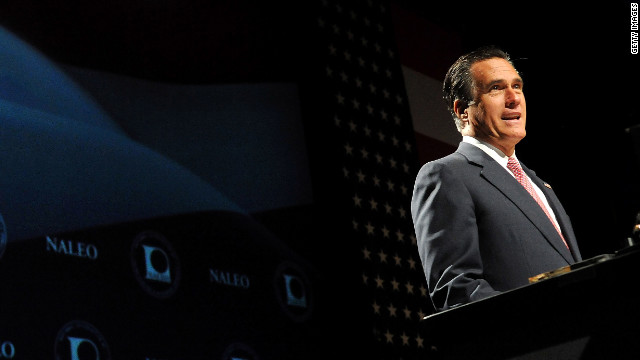 Mitt Romney speaks at the National Association of Latino Elected and Appointed Officials in Florida on Thursday.
June 22nd, 2012
10:00 AM ET

Opinion: Romney too timid on immigration

Romney needs to answer two simple questions: "What specifically are you going to do about the estimated 800,000 "DREAM'ers" at the center of President Obama's announcement last week - those young illegal immigrants under age 31 who, because they've graduated from high school or served in the military, are being told they'll be spared deportation? Would you deport them or let them stay in the United States?"

And during his speech Thursday to the annual conference of the National Association of Latino Elected and Appointed Officials, here is the closest that Romney came to an answer:

Surely, Romney must have an idea of what he thinks the proper solution should be. Why not share it?