'There is nothing exciting about me or any other black Republican'

(CNN) - Don Harwell has not spoken to his twin brother in 10 years.

"As I remember it, the discussion was (that) the Book of Mormon was a lie, " Harwell says.

His brother, a born-again Baptist, was speaking about his faith. Harwell finally got tired of trying to defend his own faith to his brother, and they have not spoken since that call. "It hurts, you know," Harwell shares.

But, he adds: "I have real short patience with people who don't have the knowledge of a book they have never read."

He has become accustomed to being misunderstood at times.

He is black. He is conservative. He is Mormon.

And he plans to vote for presumptive GOP nominee Mitt Romney.

In an election year where one poll currently puts African-American support for Romney at just 5%,  and after a NAACP speech that brought boos to the Republican, conservative blacks have again become a focus.

Is Obama taking the Black vote for granted?

"I'm a conservative, but not necessarily a Republican"

Don Harwell is president of the Genesis Group, a support group for African-Americans in The Church of Jesus Christ of Latter Day Saints.

"I know the church is true and I am a firm believer," he said. "There are always problems, you can find the problems, or you can focus on the positive side."

He had a circuitous journey to becoming baptized as Mormon, and conservative.

He grew up in Los Angeles where his dad was a "good businessman," and mother helped manage their publishing company. She was a practicing Catholic who took Harwell and his two brothers to mass.

But when Don was old enough to "get away from it," he went on his own spiritual quest.

Work took him to Colorado, and later Utah. By then he was "diligently searching for a place to get closer" to the Holy Spirit.

Harwell recalls that when he asked God if the Church of Jesus Christ of Latter Day Saints was the true church, he had a physical burning in his chest.  He saw that as his answer. "If the Heavenly Father gives me the feeling that this is the right thing to do, I'm doing it."

He recognizes why some have suspicions of the Mormon faith, and are wary of the church's history.  He remember the rumors he heard about the church being "racist" before he joined. That is part of why he has worked so hard with the Genesis Group, the LDS church's support group for African-Americans, to ensure a more supportive culture.

"It is nice to see other people like you who enjoy the same things like you and share the same spirit of our Heavenly Father," Harwell said. "The church itself is perfect, but people aren't."

It is also how became acquainted with Romney.

He plans to vote for the presumptive Republican nominee, and he worked on the former Massachusetts governor's 2008 presidential campaign.

"I'm a conservative, but not necessarily a Republican."

Today, he is a power company executive who lives in Cottonwood Heights, Utah, with his wife.

His wife plans to vote for President Barack Obama. 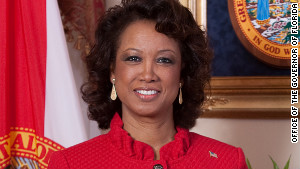 "People are not concerned with the politics or party, but what is going to bring a prosperous future ..."

"Keep in mind, I am a lifetime member of the NAACP and support their cause in equal opportunity," Florida Lt. Gov.  Jennifer Carroll shares in a quick phone call on her way to the airport.

She is the first African-American statewide elected officer in Florida, under Gov. Rick Scott.

When Romney addressed the NAACP, she was there. "I applaud his efforts for not shying away from an audience that may not vote for him," she said. "When people get to know Gov. Romney, they will appreciate his candor."

Plus, she adds, people might be surprised how many in the NAACP audience his message resonated with. She noted that several in the audience whispered to her that the presumptive Republican nominee was "right" about some of the points

"I think that people are not concerned with the politics or party, but what is going to bring a prosperous future for their family."

"I've been black all my life"

Texas state Rep. James White is definitely a man concerned with politics and party, but only after his faith to God and country. 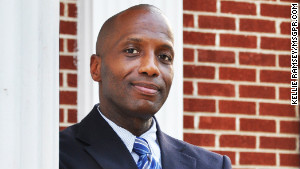 "I'm a Christian first, a Texan second, and a conservative third."

A former educator turned state representative, the 47-year-old widower is a veteran, a rancher and consultant with a doctorate in political science. He bristles a bit at the curiosity of the "exotic" black Republican. "How many black ranchers do you know?" he countered.

He insists that his political maturation is no different from anyone else: a function of upbringing, friends, and religious beliefs.

"There's no doubt I'm black. I've been black all my life," he said. "There is nothing exciting about me or any other black Republican."

But White is the first African-American and Republican to represent his east Texas district: a district that includes Jasper, the city that became infamous for the 1998 dragging death of a black man by three white men.

"Anytime there is a callous taking of a life, I was offended by it," he said.“I’m proud to represent southeast Texas, particularly proud of representing the citizens of Jasper.”

"We all have these challenges in our history that deal with race and ethnicity in many of our locales. We need to work it out locally."

He was raised in Texas by a Methodist preacher father who worked at an oil refinery, a member of a union. White attended Prairie View A&M University, the historically black college, to study political and military science and pursue his dream of being an officer in the Army.  “It was one of the best experiences I had in my entire life.”

He later focused his dissertation studying how Republicans supported black candidates like Michael Steele and Lynn Swann. It proved a training ground for his own political ambitions: he was recently re-elected for a second term.

Still, he prefers not to be boxed in by labels, and seen on his own merits.

That is why he refused to join the Romney campaign at Wednesday's NAACP address.

"I have not officially come out and (endorsed) Romney, but do plan on supporting the Republican nominee," he said.

He explained his reasons for not joining the candidate in this letter, and insists that he is "making sure the party hierarchy respects my constituency."

He just wants to be sure that he, and his district, are not taken for granted.