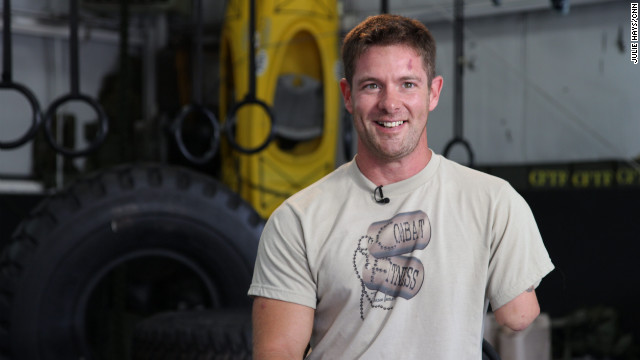 Refusing to quit, disabled veteran aims to inspire others

(CNN) - Noah Galloway's daily workouts could intimidate the most seasoned athlete. He runs, climbs, does pull-ups and push-ups, and lifts weights for nearly two hours at a time. But what really sets this 30-year-old father of three apart is that he does it all with one arm and one leg.

In the aftermath of September 11, Galloway felt called to serve his country. At 19, he withdrew from the University of Alabama at Birmingham and enlisted in the United States Army.

"After we were attacked, I felt like it was what I needed to do. I quit school and started off on a new journey."

Galloway was deployed to Iraq with the 101st Airborne out of Fort Campbell, Kentucky, in 2003. After becoming a husband and father, he returned for a second tour in 2005.

"They put us in an area that was known as the triangle of death. It was southwest of Baghdad. The units that had been there before us had taken a beating. It was just a rough area."

Four months into his second deployment, he was trying to catch a bit of sleep between missions when his platoon leader woke him.

"He said, 'Hey, we're gonna go take these Humvees to go pick up the rest of the platoon.' Said there's nothing important going on. We're just going to pick them up, coming back. Just wanted you to know we're leaving."

But Galloway says he insisted on not only joining the convoy but driving the lead vehicle, a decision that put him in the path of a roadside bomb detonated by a trip wire.

"I had no idea where I was or how I got there. I remember waking up and seeing my parents walking in. I knew I was somewhere safe because they were there, and something told me to smile because they'd know I was OK."

He lost his left arm above the elbow and left leg above the knee. His jaw needed to be reconstructed, and his mouth was wired shut. His recovery was as rough emotionally as it was physically, and during it he and his wife divorced.

His attitude started to shift thanks, in part, to a fellow amputee: his father, who lost his hand at age 18 when a machine malfunction at the plant where he worked.