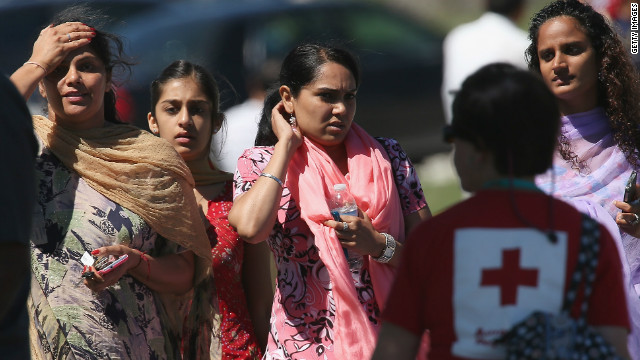 People look on in front of a Sikh temple in Oak Creek, Wisconsin, where a gunman fired upon people at a service on Sunday.
August 6th, 2012
08:00 AM ET

Mistaken for Muslims for their beards and turbans, they became ripe targets for zealots seeking revenge.

The first person murdered in retaliation for the 9/11 attacks was a Sikh – a gas station owner in Mesa, Arizona, named Balbir Singh Sodhi who was shot five times by aircraft mechanic Frank Roque.

In the intervening years, the Sikh Coalition, a New York-based advocacy group, reported more than 700 attacks or bias-related incidents.

Some Sikhs had their houses vandalized; others were spat upon. In some extreme cases, Sikhs were set upon by groups of people and beaten.

As the incidents waned, the community had hoped the worst was behind them - until Sunday when a man shot and killed at least six people at a temple outside Milwaukee, wounded a police officer, and was himself killed by another officer's bullets.

While Oak Creek, Wisconsin, police have released little information about the suspect, a spokesman with the Bureau of Alcohol, Tobacco, Firearms and Explosives' Chicago division, described him as a white male roughly 40 years of age. And witnesses said the man had a 9/11 tattoo on one arm.

A law enforcement source involved in the investigation said the shooter was an Army veteran who may have been a white supremacist.