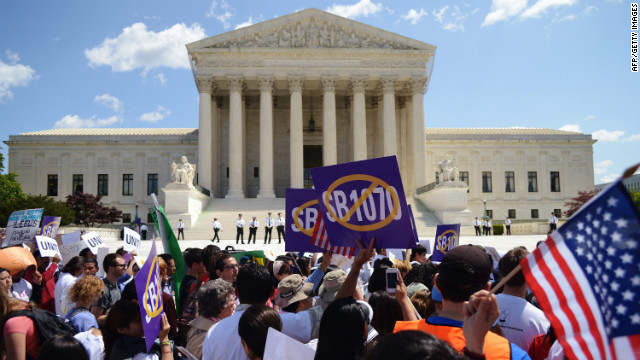 Protesters shout slogans during a protest against Arizona's immigration law outside of the U.S. Supreme Court in April.
August 22nd, 2012
11:00 PM ET

(CNN) - A federal judge is once again weighing arguments over the "show me your papers" provision in Arizona's controversial immigration law.

The provision was the only one of four major parts of the law upheld by the U.S. Supreme Court in June.

But opponents argued in U.S. District Court on Tuesday that new evidence shows that a federal judge should block enforcement of the provision.

"It is infected with racial discrimination," attorney Karen Tumlin of the National Immigration Law Center said outside the courthouse Tuesday, according to CNN affiliate KPHO.

Attorney John Bouma, representing Arizona, argued that the law does not discriminate.

"You just can't say that Latinos are going to be primarily impacted and that's discriminatory," he told CNN.

The middle class falls further behind

NEW YORK (CNNMoney) - The middle class is struggling to survive and shrinking before our eyes, the Pew Research Center reported on Wednesday.

"America's middle class has endured its worst decade in modern history," the Pew Research Center said in its report. "It has shrunk in size, fallen backward in income and wealth, and shed some - but by no means all - of its characteristic faith in the future."

Of the 2,500 people Pew surveyed, 85% of those who identify themselves as middle class say it is more difficult now than it was a decade ago to maintain their standard of living. The report also found that the middle class is a much smaller part of the population than it used to be, while the poor and rich extremes of society are expanding.

The biggest issue facing the middle class is that their wealth is deteriorating, said economist Richard Fry, who co-authored the report. The housing crisis eroded much of the middle class' net worth, creating a "lost decade" in terms of economic well-being for this group.

"For middle-income households, a lot of wealth was in their home, so the housing bust really impacted their nest eggs," he said. "Middle-income families are the only ones whose nest eggs have plummeted."

(CNN) - Driver's licenses and other state benefits are at the heart of a new battle in the national immigration debate.

Arizona Gov. Jan Brewer fired the opening salvo last week, on the same day that federal authorities began accepting applications for a program aimed at helping tens of thousands of young immigrants who entered the country illegally as children.

Brewer ordered officials in her state not to provide driver's licenses or any other benefits to immigrants granted "deferred status" under the new federal program, which allows accepted applicants to remain in the United States and work without fear of deportation for at least two years.

"A lot of these issues are in uncharted waters. In this particular area, which is how do you treat people that are deferred action, there's very little legal precedent to go by," said Muzaffar Chishti, director of the Migration Policy Institute's office at the New York University School of Law. "States are making their own judgments."

That means the actual benefits recipients see could depend on where they live.

(CNN) - In a dusty old attic in Chattanooga, Tennessee, Stephon Tull was rummaging through dilapidated boxes left there by his father many years before, when he came across an interesting find.

"I'm a rummager, a packrat," said Tull. "That piqued my interest."

Tull acquired a reel-to-reel player and listened to what sounded like his father interviewing Dr. Martin Luther King Jr. about nonviolence and the civil rights movement.

"I could not believe what I was hearing," said Tull.