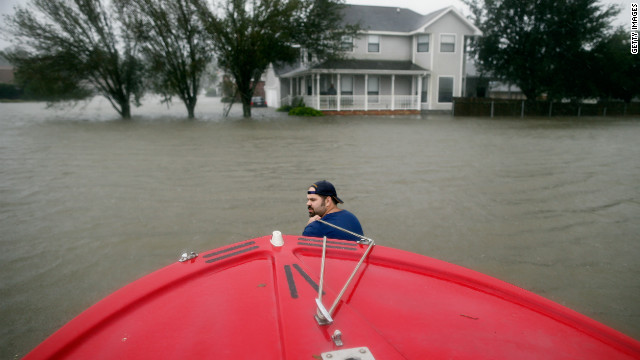 Isaac and me: How a New Orleans native rides out a storm

By Colette Bennett, Special to CNN

(CNN) - Outside my window, the wind is starting to die down, although it still comes through in gusts, sending branches and debris tumbling down the deserted street outside. The power's been out since 4 a.m. Life has skidded to a slow crawl, with no data available on my smartphone and no Internet to tell me when the storm might subside.

It's just me inside my shelter, listening to the howl of the weather and racing to eat everything in the fridge before it spoils and has to be tossed into a garbage bag.

Some people in New Orleans party before a storm starts or even after it begins. Young voices hollered and whooped down the street last night, kids running through the rain with bottles in their hands. In the meantime, I stood on the porch as the wind started to pick up. Waiting.

Luckily, I made sure to charge up all my laptops before the power went out. In the dark, I sit in front of a rectangular glowing screen, a reminder that my separation from technology is only temporary until someone comes and repairs the lines. Soon, I'll be connected to the world again. For now, I send texts from time to time, just to make sure others are OK, to let them know I am thinking of them as we sit in the darkness listening to the world outside. 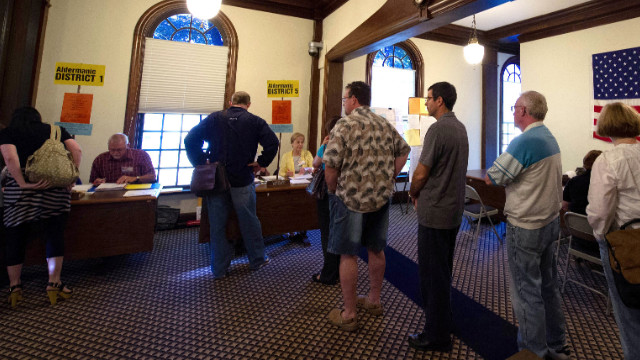 Voters enter the polling station at City Hall in Hudson, Wisconsin, in June in the vote on whether to recall Gov. Scott Walker.
August 31st, 2012
02:00 PM ET

(CNN) - In the space of two weeks, two different courts have come to two different results in evaluating the legality of two similar voter identification laws.

Despite their differences, both courts were quite right to agree on a central proposition: We really don't know how large an impact these voter ID laws will have on elections. In the end, the question, both legal and moral, often boils down to who should have the burden of proof: Should states be forced to show their laws are justified because they prevent demonstrable fraud or should opponents be forced to show that the law prevents large numbers of people from voting?

Voter ID cases often pit an invisible plaintiff against an imaginary problem. It is difficult to find voters who absolutely cannot vote because of an ID law, just as it is challenging to find instances of the type of fraud such laws intend to prevent.

The plaintiffs are invisible because very few people have the means to bring the federal case to challenge such laws but don't have the ability to navigate the barriers at the Department of Motor Vehicles to get an actual ID. Also, although we do know about 10% of Americans might not have the ID necessary to vote, we don't know how many won't vote specifically because of this extra burden, how many will be motivated to get an ID or how many will resort to absentee ballots, which do not require ID.

Gay groups and "Homocon" welcomed to GOP convention despite platform

Tampa (CNN) - A man hurrying to catch the light at a corner in muggy downtown Tampa carries a book with a rainbow of color on its cover.

Its title stands out, especially here, where the Republican National Convention has officially accepted a platform that a New York Times editorial called "more aggressive in its opposition to women's reproductive rights and to gay rights than any in memory."

The book is "A Fundamental Freedom: Why Republicans, Conservatives, and Libertarians Should Support Gay Rights."

Ted McCormac is a precinct committee person for the GOP in Bradenton, Florida, and the father of a gay son. He picked up the book at a brunch co-hosted by the Young Conservatives for the Freedom to Marry and the Log Cabin Republicans - two of a small number of visible LGBT-supportive Republican groups at this year's convention.

Individual members of the Log Cabin Republicans have attended previous conventions, but this year marks a first for the group: It was invited by the Republican National Convention committee to participate in the convention itself. In addition, there are many high-profile, gay-themed events this year, including the brunch McCormac attended. "I've never been to an event of theirs, but people clearly went out of their way to be nice to me," McCormac said, with a catch in his voice. "It means so much since I'm kind of new at this."

Tampa (CNN) - Sen. Marco Rubio's convention speech Thursday introducing Mitt Romney offered voters a look at one of the Republican Party's fastest-rising stars, and brought to the fore what the conservative movement hopes its future will look like.

"I watched my first convention in 1980 with my grandfather," Rubio began, placing a date on the generational shift that he and Romney's running mate Paul Ryan represent for the GOP.

Rubio, who at 41 is a year younger than Ryan, joins the Wisconsin congressman as a young face in the party whose supporters have skewed older in the past several elections. Rubio also brings diversity to the Republican stage at a moment when Romney faces a nearly 30-point deficit among Latino voters.

Rubio used his Cuban immigrant parents' story as his version of the American Dream.

"My Dad used to tell us, 'En este pais, ustedes van a poder lograr todas las cosas que nosotros no pudimos:' In this country, you will be able to accomplish all the things we never could," he said.

Rubio's remarks in Spanish spoke to the larger theme of his optimistic address: that things are possible in America that aren't possible elsewhere.