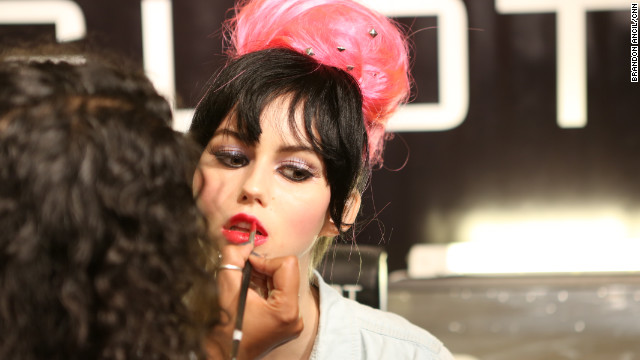 Croatian model Petra Vujevic took a year off from pursing a university degree in computer science to give modeling a try
September 15th, 2012
09:00 AM ET

The stage manager's voice fills the backstage area, busy with hairstylists and makeup artists wielding the tools of their trade over a row of girls in front of brightly lit mirrors.

"It's time for a quick run-through."

It takes an extra moment for Petra Vujevic to break free from her chair, where she is surrounded by three stylists trying to tame her long blonde hair into a "punky ballerina" bun. The head stylist is teasing sections of her natural hair while another tends to neon pink extensions woven into her ponytail. A third handles clips and brushes.

Vujevic winces. It hasn't been a good hair day for the 20-year-old Croatian model. It's the second time today that her head has been pulled in a million directions, loaded down with gooey products and hairspray.

But she refrains from pouting because it's part of the job. Anyway, modeling isn't her life - not yet, at least. It's just something she decided to try by taking a year off from university in Croatia, where she's studying computer science. She started exactly one year ago, making the rounds in Milan, Paris, London and Spain before arriving in New York three weeks ago for Fashion Week.

"When you're tall and thin, everyone says you should be a model, so I thought: try it for a year," Vujevic said in accented English, which she learned in school and from television. "It's been good. I decided to model because it was completely different. How would I know if I didn't try?"