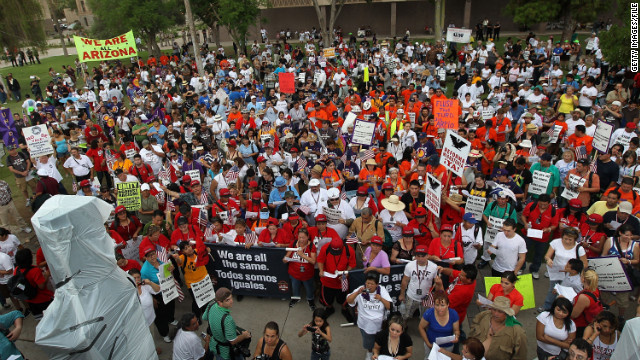 Protesters gathered at the Arizona state capitol to demonstrate against the controversial immigration law on July 29, 2010.
September 18th, 2012
11:56 PM ET

(CNN) - A federal judge has allowed Arizona to enforce the most controversial part of its politically charged immigration law, the so-called "show me your papers" provision.

In an order on Tuesday, U.S. District Judge Susan Bolton upheld the section allowing authorities, while enforcing other laws, to question the immigration status of people who may be in the United States illegally.

The Supreme Court in June tossed out most other aspects of the tough new law, but said the part known by critics as the "show me your papers" provision could go into effect, at least for now.

The hot-button immigration issue is a major attack line in this year's presidential campaign with Republicans, led by Mitt Romney, accusing President Barack Obama of failing to devise a comprehensive strategy to deal with illegal immigration.

Arizona is the nation's most heavily traveled corridor for illegal immigration and smuggling. The Justice Department said Arizona's population of two million Latinos includes an estimated 400,000 there illegally, and 60% to 70% of deportations or "removals" involve Mexican nationals.

The Pew Hispanic Center recently issued a report that found that Mexican immigration to the United States has come to a standstill. However, the debate continues as more than 10 million unauthorized immigrants - from Mexico and other countries - continue to live in the United States.

(CNN)- The Pennsylvania Supreme Court sent a controversial voter ID law back to a lower court on Tuesday to assess the availability of alternative forms of identification and whether the new law disenfranchises voters.

The high court said the state's Commonwealth Court has until October 2 to file its response, according to court documents.

The lower court, in August, upheld the law requiring that most voters show photo identification before casting ballots.

"Overall, we are confronted with an ambitious effort on the part of the General Assembly to bring the new identification procedure into effect within a relatively short time frame and an implementation process which has by no means been seamless in light of the serious operational constraints faced by the executive branch," the high court said Tuesday. 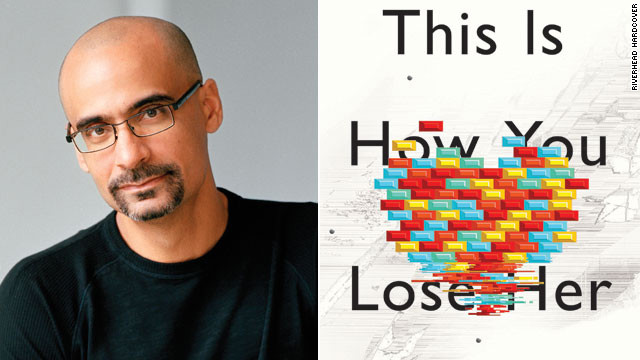 (CNN) - To claim fans have been eagerly waiting for Dominican author Junot Diaz's next book would be an understatement.

Diaz took the literary world by storm with "The Brief Wondrous Life of Oscar Wao," a story about the life of "poor lovable" ghetto nerd Oscar de Leon, narrated by Yunior, the main protagonist in Diaz's first novel, "Drown." The story of a chubby Dominican boy growing up in New Jersey won a Pulitzer Prize in 2008, National Book Critics Circle Award, and was named Time's No. 1 Fiction Book of 2007. Not too shabby.

Now, in "This Is How You Lose Her," a collection of stories released last week, Diaz brings back the character of Yunior to tell the "important and necessary story of the inner lives of 'bad boys,' " as the acclaimed author says.
Born in Santo Domingo and raised in New Jersey, the Rutgers alum took some time out of his book tour to talk about his new book, what his family thinks of his writing and the unique voice in his work.

CNN: Was it difficult to write "This Is How You Lose her," considering all the attention "Oscar Wao" received?

Diaz: I don't think it was difficult for that reason. It's one thing to write something about a poor lovable nerd who in some ways who could not find love and whose larger culture sort of rejects him and another to write about a messed-up-in-the-head cheater. And, to make that character and that story in some ways sympathetic was the greater challenge.

(CNN) – Mitt Romney on Monday said his controversial statements caught on tape were "off the cuff" and "not elegantly stated," but he defended the main message of his remarks.

Romney took three questions in a brief press conference with pool reporters late Monday night in California, scheduled at the last minute in response to the release of secretly recorded video of the candidate speaking at a private fund-raiser in May.
The video quickly caught fire as potentially damaging material to the Republican presidential nominee.

In the footage, taped with a hidden camera, Romney argued nearly half of Americans will vote for President Barack Obama because they rely on government support, made apparent jokes about wishing he had Latino heritage, and talks about a Chinese factory his former firm purchased.

The non-partisan Tax Policy Center estimates that for tax year 2011, 46% of households will end up owing nothing in federal income taxes. But if payroll taxes are counted, the number of non-payer households drops precipitously – to an estimated 18% in 2011.

Adding to his argument about entitlement, Romney said his "job is not to worry about those people." 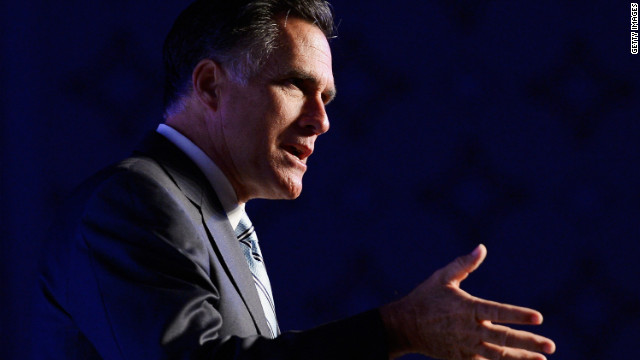