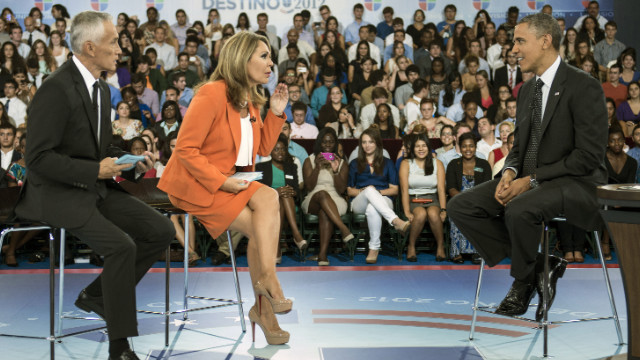 Latinos still support Obama even after admission of failure

(CNN) –President Barack Obama admitted to Spanish-language network Univision Thursday that his greatest failure was the lack of comprehensive immigration reform, but many Latino voters said the president still has their vote.

Co-host Jorge Ramos, a strong advocate for comprehensive reform, kept after Obama to acknowledge that he had not made good on his campaign pledges. For pushing the president so hard, Ramos earned kudos from Dylan Byers of Politico, who wrote:

"It's difficult to imagine a Brian Williams or a Bob Schieffer looking President Obama in the eye and saying, 'You promised that, and a promise is a promise. And with all due respect, you didn’t keep that promise.' Indeed, it's the sort of move most moderators avoid at all costs. And yet, it's the very question Ramos asked of Obama."

Ramos, Byers wrote, has chutzpah. But perhaps more importantly, he anchors for Univision, the network for this campaign's coveted Latino demographic.

Obama admitted he was sidetracked on immigration reform but said the economy had to take precedence. He also blamed Republicans in Congress.

"Jorge, as you remind me, my biggest failure is that we haven't gotten comprehensive immigration reform done," he said. "But it's not for lack of trying or desire." END_OF_DOCUMENT_TOKEN_TO_BE_REPLACED