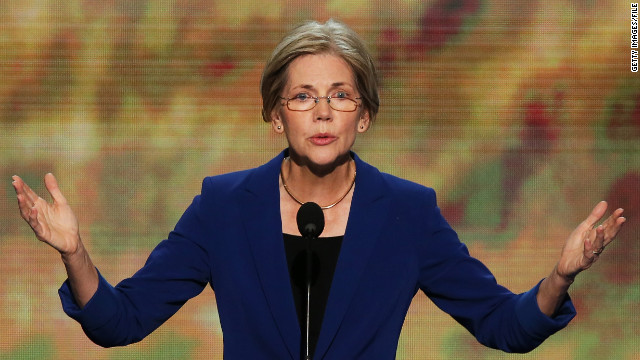 "It's not right that she would use her self-recalled heritage for any academic advancement ... even if there are no academic standards that define who is legally a Native American (except the citizenship issue). On the other hand, when you see videos like this one, you cringe."

He was referring to a video that shows Brown staffers chanting war whoops and gesturing Tomahawk chops. It was posted Tuesday on YouTube by the liberal blog Blue Mass Group.

"I think Sen. Brown has some explaining to do about the nice guy, respectful tone that he sets in his office, and on his campaign," the blog said. "And maybe we can put this whole preposterous issue to bed once and for all."

"It is certainly something that I don't condone," he said. "The real offense is that (Warren) said she was white and then checked the box saying she is Native American, and then she changed her profile in the law directory once she made her tenure."

The National Congress of American Indians said it was troublesome that Brown's staff members acted in such fashion. The rights organization urged Brown to take action.

It also blamed Warren was responsible for failing to speak up.

"She has every right to be proud of her family," the organization said. "However her campaign failed to educate a non-Native media and the public unfamiliar with federal tribal enrollment rules or about historic federal policies that make proving Native ancestry very difficult for some people."

Also at issue was Brown's reference during a televised debate to Warren's white skin color as proof that she was not Native American.

"Skin color or physical appearance has no bearing on one’s Native American heritage or status as an enrolled member of a federally recognized tribe," the national congress said. "As a result, numerous national television programs and websites have irresponsibly echoed Senator Brown’s statements by referring to someone’s skin color as an indicator for Native American identity. These claims are false and Senator Brown should correct the record and retract his statement immediately."

The debate about Warren has gone on since May, when Warren confirmed that she had described herself in faculty directories as having Native American blood. She said she did it to meet others like her.

But her explanation didn't sit well in some corners.

A website called Cherokees Demand Truth From Elizabeth Warren says Americans ought to care deeply about such claims.

"Elizabeth Warren has not just stolen an ethnic identity that does not belong to her, but she has also personally benefited from it and harmed the integrity of the American ethos of advancement based on quality of work, not color of skin."

Warren's critics were out in force Tuesday on Twitter, including the editor of the conservative Red Alerts Politics website.

But Warren was not without her supporters.

"Good for you Elizabeth, I am 1/8 Blackfoot but am fair skinned and light haired, I am the only light one in the family. If like me your blood is part native on your mother's side and your heart is walking the red road, we will not be driven into the shadows. I hope that you win, you had my vote before I learned of your roots."

As Trahant said, it's complicated.

What makes someone "legitimately" Native American? And who gets to make the call? Our blog attempted to answer those questions when the Warren controversy erupted.

"It's all in past-tense, and we don’t get a sense of what an Indian today looks like," she said in May.

And that, she said, can be confusing.