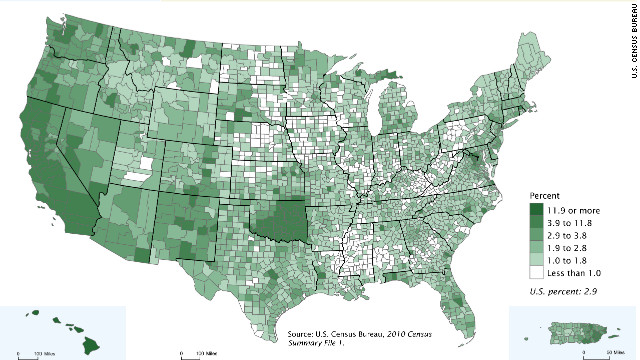 (CNN) - Before 2000, you had to pick one: White, black, Asian, American Indian, Alaska Native or some other race. But now you can tick multiple boxes on the U.S. Census Bureau's race category.

The 2010 census provided the first glimpse of trends in multirace reporting since it was the second time such an option was available. And what it shows is that people who say they are a mix of races grew by a larger percentage than people who reported a single race, according to the data released Thursday.

People who reported a background of mixed race grew by 32% to 9 million between 2000 and 2010. In comparison, single-race population increased 9.2%.

But that does not necessarily mean there are many more children of interracial couples.

Sociologist Kris Marsh said that it could be that many people who checked only one box in 2000 have decided to celebrate their diversity and checked multiple boxes this go-around. Say you are white but you know that you have some Asian blood in you. Or take the example of Senate candidate Elizabeth Warren in Massachusetts. She says she has Native American ancestry and could have ticked two boxes in the census.

Elizabeth Warren: Is she, or isn’t she Native American?

Multiple-race category celebrates American diversity. But it could have consequences, said Marsh of the Maryland Population Research Center.

It could lower the number of people who are counted solely as African-American or Native American, said Marsh,  and take away from political representation for those minority groups.

"I don't want to discount this (multiracial) group," she said. "But I do think there are some challenges."

The white and some other race responses mainly reflect people who reported white with a Hispanic origin. Hispanic or Latino is an ethnic, not racial, category in the census.

The census showed 16 states where the people who reported more than one race exceeded 200,000 or more. The top three were California, Texas and New York. Each of those states reported a multiple-race population of 500,000 people or more.