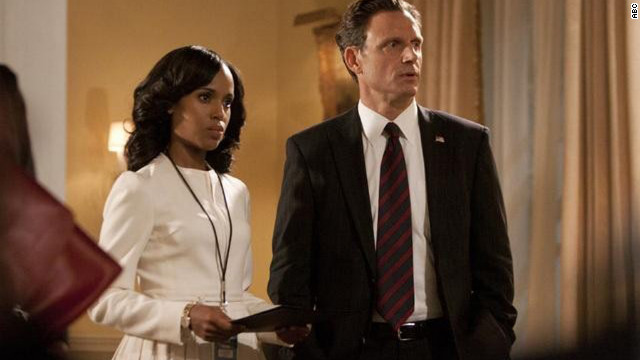 (CNN) - Kerry Washington knows you have been waiting.

The star of the hit ABC series "Scandal" is fully aware that there is a legion of "gladiators in suits" (as fans call themselves) eagerly awaiting the return of the series. She, too, is pretty excited to be back playing Washington, D.C. insider and crisis management expert Olivia Pope. Pope is a "fixer" who formerly worked for her lover, Republican President Fitzgerald Grant.

When told that there are many women who try to emulate both Pope's sense of fashion and take-charge personality, Washington laughs.

The series ended its first season with the revelation that the character Quinn Perkins, an employee of Pope's (and played by Katie Lowes), was not actually Quinn Perkins.

Perkins calls Pope after she is jailed for the murder of her boyfriend, a reporter who was digging into the secrets of President Grant's administration.

Did we mention that said president also happens to be in love with Pope?

Season 2 answers the "Who is Quinn" question in the first episode, but Washington said there will be plenty of other surprises and mystery this season that even she isn't sure about.