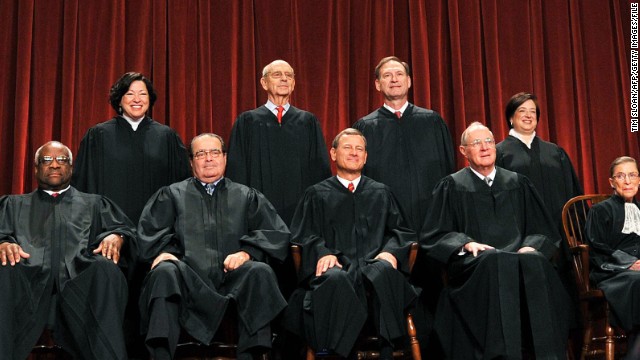 Supreme Court kicks off new term, faces agenda that could be historic

(CNN) - A day after the Supreme Court upheld the health care law, Chief Justice John Roberts joked that he would spend some time at "an impregnable island fortress" to escape the torrent of vitriol and praise heaped on the bench.

The nation is now focused on the presidential election, but attention will likely shift back to the court after the November vote. A new term opens on Monday and the nine justices will address another potentially historic docket. Affirmative action, same-sex marriage, voting rights, and abortion could be taken up.

"The justices are moving from the frying pan right into the fire, having moved up with the big healthcare case," said Thomas Goldstein, a leading Washington lawyer and publisher of SCOTUSblog.com. "They are tackling some of the most difficult legal questions of today. Across the board, probably the biggest term in at least a decade."

A range of explosive issues will test Roberts' leadership of a shaky 5-4 conservative majority:

–Affirmative action and whether universities may continue to use race as one factor in student admissions to maintain a diverse campus.

–Same-sex marriage and the constitutional "equal protection" rights of gay and lesbian couples to wed.

–"Personhood" laws that say life begins at conception, a push by some states and anti-abortion opponents to perhaps revisit the Roe v. Wade ruling.

These issues and several other important criminal, business, and international cases could change the social political landscape in coming years.