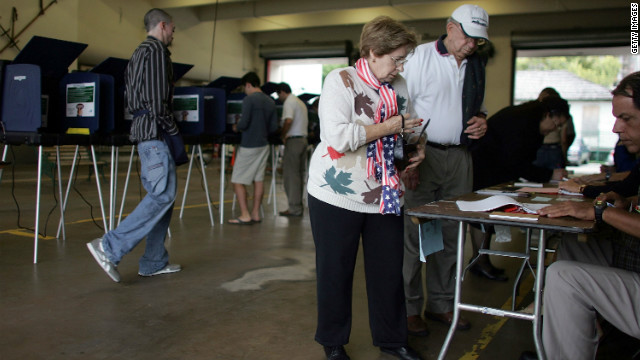 (CNN) – More Latinos will be eligible to vote in November's election than at any other time in American history, but getting them to the polls will provide campaigns a challenge, according to a report released Monday.

The Pew Hispanic Center report indicated 23.7 million Latinos are eligible to vote November 6, meaning they are U.S. citizens over the age of 18. That's an increase of 22% since 2008, when there were 19.5 million Latinos in America who met the country's voting requirements.

While both Mitt Romney and President Barack Obama have aggressively courted Latino voters, the turnout rate for the group in 2008 – 50% - was lower than that of black voters (65%) and white voters (66%).

And the decrease in voter registration between the 2008 election and the 2010 for Latinos was sharp – 600,000 fewer Latinos registered to vote in the midterm elections than they did for the presidential contest two years earlier.

The Pew report suggests two factors that could have led to the decrease over two years: reduced enthusiasm for a non-presidential election, and an economic downturn that has displaced many Latinos (and subsequently caused their voter registration to lapse).

Whether or not the downward trend from 2010 continues this year remains to be seen, since national data on voter registration isn't available until after the election.

North Carolina, another battleground, also reports an increase in Latino registered voters since 2008 – 102,000, compared to 68,000 who registered four years ago.