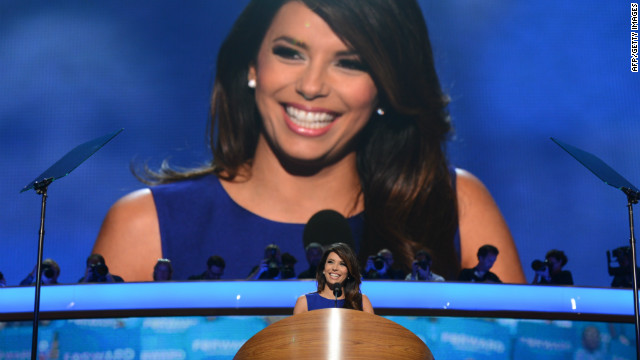 The year of the political Latino celebrity, starring Eva Longoria

(CNN) - Eva Longoria is considered one of the most politically involved celebrities in this election cycle. But it's not a new role for her. She has been politically active for 20 years now, and it all started in high school.

“My government and economics teacher gave us a project where we all had to volunteer during the election. We could choose whatever party, but we had to volunteer and help register people to vote. It was part of our grade,” Longoria said. ”So I caught the political bug from there.”

That was when the "Desperate Housewives" star was a 17-year-old student at Roy Miller High School in Corpus Christi, Texas, during the first Clinton presidential campaign.

Years later, she was quite vocal during President Barack Obama’s 2008 bid, and this year she is co-chairwoman on his re-election campaign.

Beyond Longoria, it seems like 2012 has become the ultimate year of the politically active Latino celebrity, with the likes of Rosario Dawson working very closely with Voto Latino, a nonpartisan organization aimed at bringing diverse voices in the political process to promote positive change.

Grammy-winning singer Marc Anthony sang the National Anthem at this year’s Democratic National Convention, and Pitbull and Jessica Alba hosted the closing night festivities. Emmy-winning actor John Leguizamo also attended the DNC, stating, “Obama creates the egalitarian, equal-opportunity America that I love to be a part of, and it made me who I am today."

"Ugly Betty’s" America Ferrera launched America4America.org, a civic engagement campaign under Voto Latino aimed at educating Hispanics on key issues in the presidential election and motivating them to get involved in the process.

This week, stars including Wilmer Valderrama, Demi Lovato and Dania Ramirez starred in a hilarious Voto Latino PSA to inspire Latinos to go out and vote.

For Longoria, there is still work to do.

Even while traveling across the country educating voters on policies and issues - specifically the Latino and women’s communities - Longoria continues to come across voter apathy.

“There are a lot of people who think, ‘Eh, I won’t vote, because my vote won’t matter,’ but it does. Every vote matters. Citizens are being subjected to attack ads and misinformation, so you can’t really base your decision on all of that propaganda,” Longoria said. “You have to really be knowledgeable and literate on what each candidate stands for.”

The potential engagement is huge. A recent study by the Pew Hispanic Center found that more Latinos, a record 24 million, will be eligible to vote in November’s election than ever before. Latino voter turnout remains to be seen, but until then, Longoria won’t let the numbers hold her back.