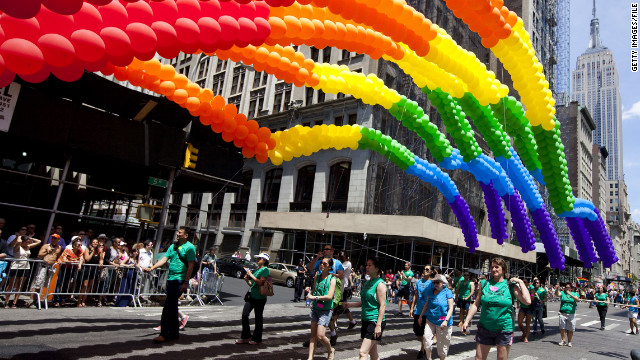 Gay pride is marked by parades, like this one in New York in June. LGBT month is meant to be more educational.
October 8th, 2012
03:52 PM ET

"I want LGBT students to see their education as the diamond, their joy in their life rather than their trauma,” said Judy Chiasson, diversity coordinator for Los Angeles schools.

“Schools have an obligation to present the diversity of our communities," she said. "There are many different types of families; we want all of our families to be recognized in our schools.”

Democratic Sen. Mark Leno, who sponsored the legislation, said at the time that research shows that students who learn about LGBT people are more likely to report that their schools are inclusive and fair.

Preventing bullying and suicides in schools

However, the bill drew ire from religious and conservative groups, like the lobby Traditional Values Coalition.

Equality Forum, which sponsors LGBT month, is featuring a LGBT icon every day in October. Among them are author Truman Capote, designer Jean-Paul Gaultier and CNN anchor Don Lemon.

Watch Lemon talk about his sexuality

"The LGBT community is the only minority community that is not taught in schools," Lazin said. "So no wonder homophobia exists."

He called the recognition in the two school districts a "giant step in public school embracing LGBT inclusion and respect.” LGBT month will help children learn about the the role of gays and lesbians, he said, and help "break the cocoon of invisibility" for Americans who for many years have remained under the mainstream radar.

But 14,000 school districts have yet to adopt LGBT month, which this year kicked off with a road dedication ceremony honoring lesbian activist Barbara Gittings in her hometown of Philadelphia. A red sign heralding Barbara Gittings Way was placed under the name of Locust Street between 12th and 13th in the city's "Gayborhood."

Gittings edited the first lesbian publication in America. She persuaded the Library of Congress to include gay and lesbian books in the nation's card catalogs and libraries. And, with Frank Kameny, she successfully challenged the American Psychiatric Association to remove the classification of homosexuality as a mental illness.

Gittings, said Lazin, was a woman who came out in public to fight for gay rights at a time when many gay Americans did not even dare to come out in private.