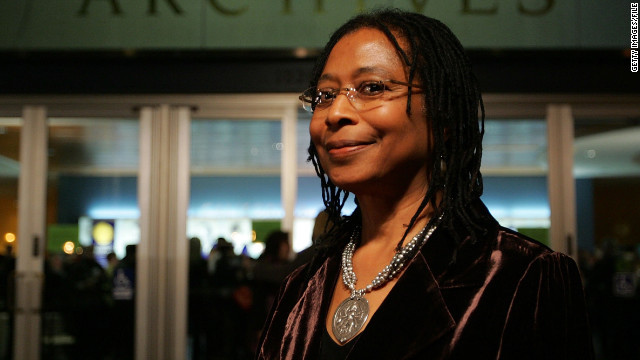 Atlanta (CNN) - In this 30th anniversary year of "The Color Purple," and as a presidential election fast approaches, activist and Pulitzer Prize-winning author Alice Walker ruminates on changing American identity, the choices in national leadership and her own legacy.

CNN spoke last week with Walker in Atlanta, where she was reading 30 years of her journals that are a part of a collection of papers she donated to Emory University. "I wonder why I ever wrote all that. I was thinking it would make a nice fire," she said.

She's written an election-year poem, "Democratic Womanism," dedicated to Kenyan Nobel Peace Prize laureate Wangari Maathai, who, as Walker says, remembered the beautiful bountifulness of her land before colonization and resolved to bring it back by planting trees.

I want something else;

for thousands of years. If ever.

Notice how this word has "man" right in the middle of it?

That’s one reason I like it. He is right there, front and center. But he is surrounded.

I want to vote and work for a way of life

that honors the feminine;

a way that acknowledges

the theft of the wisdom

CNN: Is "Democratic Womanism" an answer to our national problems?

Alice Walker: That’s a very good possibility. But I think what I am really more interested in is that I want people to be thinking in other ways - to stop thinking they have to remain glued to a system that has failed and to ideas about society that’s necessarily about being run by Democrats or Republicans.

I think that indigenous women’s wisdom is crucial. So much of the care of the Earth ... has come from the mothers. I think it’s imperative we turn to their wisdom in how to take care of the planet.

I would like leadership and a collective leadership. It’s not about electing a president or maybe a council but definitely something that is informed by the wisdom of the indigenous and women of color who have had some compassion for the Earth and some compassion for the children of the Earth. So they would be less likely to engage in wars in which they end up killing each other's children.

CNN: Do you think that voters are more polarized along racial and ethnic lines than they have been in some other recent elections?

Walker: I think America has always been polarized.

This is one of the things about (President Barack) Obama’s election. He has caused a lot of the racism to come to the surface. And people are emboldened to become more vocal about their racism because they have company and they can connect with each other over the Internet easily.

It’s a racist country and it has always been.

America is America. It was founded on the slaughter of the Indians, genocide of the indigenous people and the enslavement of black people - and all for profit. It’s a capitalist system. They have enshrined that belief that profit matters more than anything else. And it doesn’t really matter (that you teach) how you abuse people or how you destroy people. The polarization that seems recent or new is just the resurfacing of that.

CNN: How do you get beyond that?

Walker: You may not.

CNN: America is becoming a more racially and ethnically mixed nation. What does that say about our national identity?

Walker: I think that it's very good that it's becoming more racially and ethnically mixed. A part of what we're seeing is white people having an identity crisis because they are definitely afraid they will be outnumbered - and they will be.

So I think we are having a period of identity fright.

People who desperately want (Republican candidate Mitt) Romney to represent them as a white man - they cannot see themselves in someone of color. They've never been able to.

CNN: This is the 30th anniversary year of "The Color Purple." Your story of a young, poor African-American woman in 1930s rural Georgia moved audiences worldwide. What did the novel mean to you?

Walker: The relevance to me was that I was able to write a novel in which I imagine the lives my grandparents and parents had before I was born. It was a gift of that experience to whoever could accept it.

It's a great affirmation of the power of love, basically. I was talking to students a few days ago about how in a way what they get from it, if they are open to it, is the love my grandparents were able to give me when I was 8 or 9 years old.

What that means is that love likes to extend itself. If you receive it in a book - or however you get it - then your duty is to extend it beyond. That is how I think of it.

You don't really stay attached to things. Life goes on, so you don't really sit around and think about how they are relevant to other people. You hope that whatever you create will be (relevant).

CNN: How do you view your legacy?

Walker: I don't think about it.

CNN: You have given Emory University more than 120 boxes worth of your correspondence, drafts, journals and fan mail. ...

Walker: In a way, I left all my papers at Emory and I've written all these books. Hopefully people who are searching for some solace, compassion, understanding, thought will find that kind of nourishment in the work.

But I am also very aware of how close we are to nuclear war and that none of what we think of as "Western civilization" may even endure at all.

So it's a very existential place to be in creating and giving and encouraging and at the same time understanding that we are at the mercy of mad men who run the planet and we may not have any impact really after the devastation that could happen.

You continue to give because that's your nature. But in any kind of grandness in terms of what you want your legacy to be is absurd in the face of where we actually are in terms of a planet.