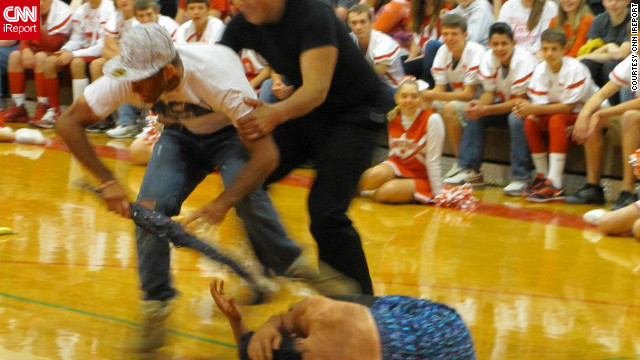 (CNN) - It was a homecoming rally to cheer on the Waverly Wolverines football team. They were undefeated this year. Everyone was proud.

Then, in the midst of the cheers and a sea of red and white pom poms came a 30-second skit that, for some, turned an afternoon of school pride into one of shame.

Three white male students involved in the skit made light of domestic violence, and they did it in racist manner, say some.

Two were in blackface as they re-enacted a 2009 domestic abuse incident in which singer Chris Brown assaulted then-girlfriend Rihanna. The student who played Brown was vying for the school's "Mr. Waverly" title - a school tradition in which skits are performed and the one that garners the most applause wins the title.

On Monday, Waverly alum Matthew Dishler posted a photograph of the skit on CNN's iReport. He says someone shared the image on Facebook.

Read more about the controversial skit