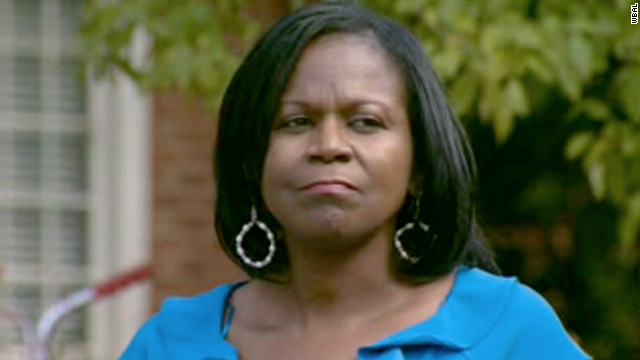 Angela McCaskill was suspended after it was revealed she signed a petition for a referendum on same-sex marriage.
October 17th, 2012
04:28 PM ET

Diversity chief: my reputation is tarnished

(CNN) - She was the first deaf, African-American woman to earn a doctorate from Gallaudet University. It seemed Angela McCaskill was the perfect choice to serve as that university's chief diversity officer.

And she was, until last week when the president of Gallaudet, the nation's leading higher education institution for the deaf, placed McCaskill on paid administrative leave.

Because a faculty member had informed the school that McCaskill admitted to signing a petition that put Maryland's same-sex marriage law to a statewide vote.

McCaskill kept her silence for many days but Tuesday, she came out swinging, demanding compensation from Gallaudet for the stress and harm done to her reputation. She insists she is not anti-gay; she simply wanted to exercise her political rights.

"No one had the right to determine what my signature meant," said McCaskill through an interpreter at an outdoor news conference in front of the Maryland statehouse. She was joined at the podium by members of the state's legislative black caucus, including some who voted in favor of the same-sex marriage law.

"They have attempted to intimidate me," McCaskill said of university officials. "They have tarnished my reputation and 24 years of service. This situation has spiraled out of control.

She said her record at Gallaudet spoke for itself.

"I ask to be judged by what I have done," she said.

"As many know, Dr. McCaskill exercised her right to sign a petition concerning legislation on gay marriage," Hurwitz said in a statement Tuesday. "Because of her position at Gallaudet as our chief diversity officer, many individuals at our university were understandably concerned and confused by her action. They wanted to know: 'Does that action interfere with her ability to perform her job?' "

Hurwitz acknowledged that the matter had gone far beyond campus borders.

Both supporters and opponents of gay marriage have come out in support of McCaskill.

McCaskill said she is not anti-gay.

The same-sex marriage referendum is on the ballot in November.

Marylanders for Marriage Equality condemned her suspension in a full-page ad in The Capital newspaper.

"Unfortunately, opponents of marriage equality are trying to make what happened to Dr. McCaskill about Question 6, the November ballot measure that will allow gay and lesbian couples to get a civil marriage license and protects religious freedom," it said.

"But her suspension from a D.C. university has nothing to do with Question 6 in Maryland. It does however have everything to do with being able to express one’s opinions, freely, and participate in the political process. As an American, Dr. McCaskill has every right to her view on marriage – and that includes signing the petition to put the issue to a public referendum."

The group called for immediate reinstatement.

Joy Pullmann of Chicago wrote a letter to the editor to the Baltimore Sun: "So much for the academic freedom universities promise they uphold, and so much for U.S. tradition of and laws protecting our right to free speech."

Others said they were disappointed that someone who holds a diversity post acted in such a way.

"She’s been a great ally to the LGBT community and ... I’m heartbroken about this," a Gallaudet student told Planet DeafQueer. The student was not identified.

Hurwitz said he hoped for a resolution that would enable McCaskill to return to her job.

But McCaskill said she was shocked, humiliated and ultimately dismayed that Gallaudet seemed to be a place of intolerance for differing views.