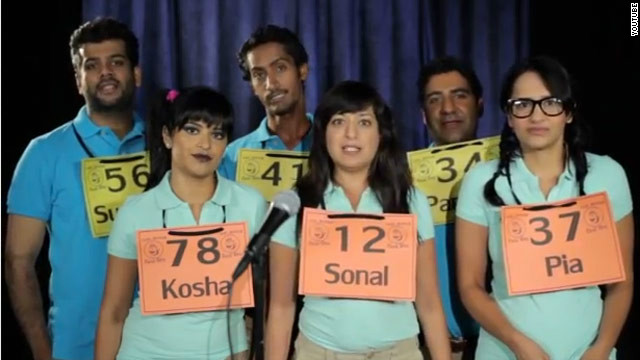 Can you spell 'undecided?' Videos encourage South Asians to vote

(CNN) - Two things you should know about South Asians: They are one of the fastest-growing populations in the United States and they win spelling bees.

Put the two together in an election year and what you get is a series of public service videos aimed at drawing South Asians to the polls. And they do it by poking fun at their own spelling prowess - nine of the last 13 Scripps National Spelling Bee winners have been South Asian.

The "Bee a Winner" videos feature six South Asian actors - including Parvesh Cheena of "Outsourced" and Sonal Shal of "Scrubs" - in a mock “14th Annual Desi Spelling Bee.” Each word they have to spell tackles an issue of civic engagement like "undecided" or "caucus."

"We came up with the idea of the spelling bee because it speaks to the aspect of the model South Asian," producer Sohini Sengupta said.

She said getting out the vote was the first step to political empowerment for South Asians.

Among them are about 3.4 million South Asians - people who claim ancestry from India, Pakistan, Bangladesh, Bhutan, Nepal, Sri Lanka and Maldives. They are otherwise known as the desi community. "Desh" means homeland in South Asian languages.

"There's a huge problem of getting them out to vote," she said.

One of the words in the mock spelling bee is "community."

"One in six of the South Asian community lives in a battleground state, which means they can make a real difference in this election," says the moderator.

One problem, Sengupta said, is that many South Asians are more in tune with homeland politics than they are with what's going on in America.

The spelling bee videos were meant to get young desi voters out on Election Day but Sengupta hopes they will appeal to the entire South Asian community.

There's no centralized way to mobilize South Asians, she said.

"Desis come in all shapes and sizes," she said.

"So we decided to poke fun at ourselves; to play on the stereotypes."

This South Asian reporter can attest to the humor. The videos are funny.