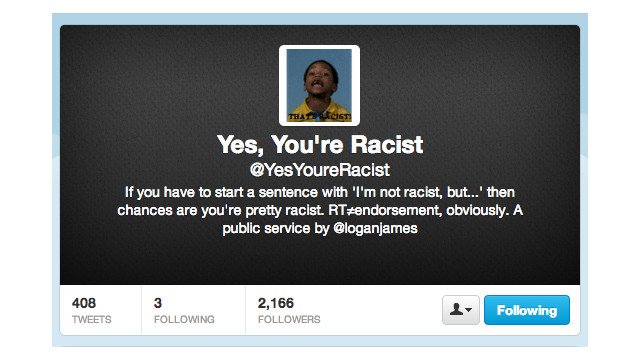 You're 'not a racist, but...' you're getting called out on Twitter

(CNN) - Every now and then, Logan Smith likes to search Twitter for things he thinks people would never say. Just for his entertainment.

Like when astronaut Neil Armstrong died, Smith typed in: "Who is Neil Armstrong?" Who in America doesn't know about the man to who took a giant leap for mankind? Sure enough, he found, there were a bunch of folks who had no idea.

In the midst of all his searches, Smith made a startling discovery: a lot of people like to start tweets with this line: "I'm not a racist, but..."

Smith was shocked. Dismayed by what he read.

"It's ridiculous to think that people don't think they are racist when they say these things," he says. "Some people say we are living in a post-racial society. Now we have a black president, somehow that made everything OK. But that is completely not the case."

So Smith decided to call some tweeps out.

About a month ago, he started a Twitter handle called @YesYoureRacist.

END_OF_DOCUMENT_TOKEN_TO_BE_REPLACED

This is the third in an occasional series on issues of race, identity and politics ahead of Election Day, including a look at the optics of politics, a civil rights icon registering voters and how parallels to the past haunt the age of Obama.

He's the last standing white Democrat from the Deep South in the U.S. House of Representatives, a remaining sliver of a party machine that once brokered power for the region's establishment. 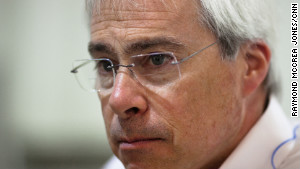 John Barrow, the last white Democratic congressman from the Deep South, is fighting to win in a conservative district.

Barrow's political death, if it comes on Election Day, would serve as a stark signal of the electoral realignment dividing Southern Democrats and Republicans along racial lines.

The ramifications are huge - not just in the South, but nationally - in determining the future of both parties, say political observers and historians who are closely watching Barrow's uphill battle.

If Barrow loses, every Democratic congressman from Louisiana, Mississippi, Alabama, South Carolina and Georgia will be black. Every Republican will be white, save Rep. Tim Scott of South Carolina, who was elected in 2010 with Tea Party backing.

Barrow finds himself working hard for votes in Georgia towns swept by a tide of Republican Red - towns like Baxley, where, among many folks, saying "Democrat" is like taking the devil's name.

Barrow has attended the "Redneck Games" in Dublin and recently hosted a barbecue dinner at the American Legion Altamaha Post 26, where he bought five raffle tickets for a Mossberg Model 500A 12-gauge shotgun.

He might belong to the party of his daddy and his granddaddy, but his public persona stands far removed from Washington's Democratic leadership. END_OF_DOCUMENT_TOKEN_TO_BE_REPLACED