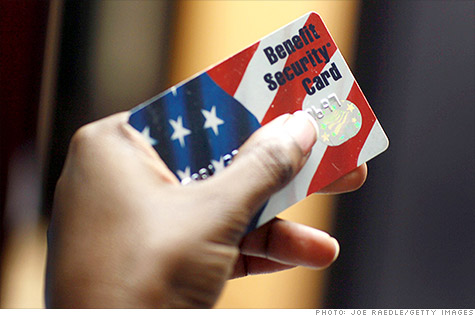 NEW YORK (CNNMoney) - One wants to strengthen the nation's existing safety net. The other wants to overhaul it.

President Obama and challenger Mitt Romney have vastly different views on how to help the 46.2 million Americans in poverty and the more than 30 million people who are near poor. The president leans toward expanding the programs that exist, while the Republicans say they will set up a system that fosters economic opportunity instead of government dependency.

The ranks of the poor and the government programs that assist them swelled during the Obama administration, largely because of the Great Recession. The number of people in poverty jumped 16% between 2008 and 2011, while the Medicaid rolls jumped 23.5% over that time. Food stamp enrollment soared 46% during his term.

Just who is elected president matters a great deal for the poor. In the weeks following Election Day, the president and lawmakers will have to deal with large, across-the-board cuts in domestic spending scheduled to take effect in January. While certain programs for the poor, such as food stamps and Medicaid, would be protected, other initiatives, including Head Start and housing assistance, could be slashed.