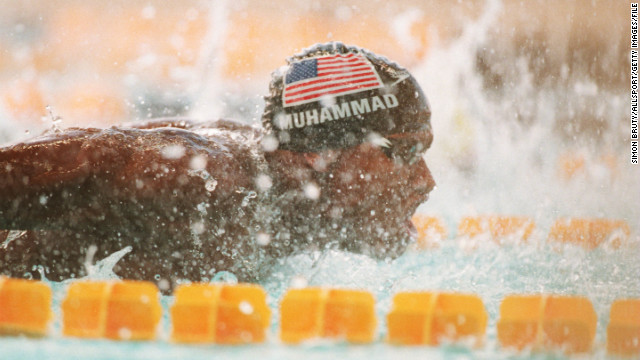 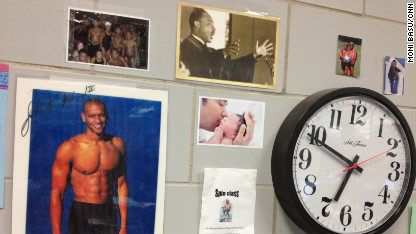 Photos of Martin Luther King Jr. and Sabir Muhammad are in the manager's office of the Adamsville Natatorium in Atlanta.

The schoolhouse clock hanging next to the image of a Speedo-clad Muhammad in Adamsville says 6:45 p.m., and about two dozen black children have come here after a long day of school.

Some are with the city of Atlanta's Dolphins swim team, for whom Muhammad once swam and made his mark in the sport.

Muhammad opened his own swim school, but he occasionally drops by Adamsville to see his old coach, Tommy Jackson, and stand as inspiration for a new generation.

A few of the students have traveled for more than an hour on clogged rush-hour highways. They will get home just in time for dinner, homework and bed.

As they swim lap after lap, their mothers wait for them on metal bleachers for two hours, maybe more. They do this three times a week. 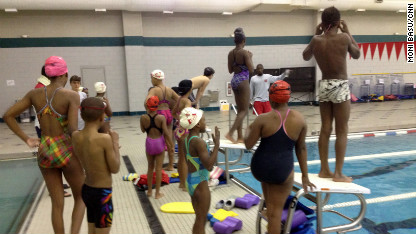 Children with the city of Atlanta's Dolphins swim team receive instruction at the Adamsville Natatorium.

The air is heavy, damp and chlorine-laden. Jackson, 66, orders 335 laps for the older swimmers in the 50-yard pool.

Star swimmer Derek Cox, 15, shows up late. With no time to waste, Jackson makes sure he gets in the water fast.

"If you're not breathing hard, you need to swim a little harder," Jackson yells.

The former schoolteacher has been coaching inner-city kids to swim for as long as he can remember. He was a mentor for Muhammad, who, as a boy, ate dinner at Jackson's house and even slept there some nights.

Swimming, Jackson tells his students, is a life skill. If you fall in the water, you'll drown, he says. If you don't learn discipline, you'll die in other ways.

Fear of the water

Muhammad might have been like so many black kids in America who don't know how to swim.

It's an issue that haunts Wanda Butts, one of the Top 10 CNN Heroes of 2012. Butts' 16-year-old son drowned six years ago while rafting on a lake with friends. He couldn't swim.

In memory of her son, Butts started the Josh Project, which provides low-cost swimming lessons for more than 1,000 children — most of them minorities — in Toledo, Ohio.

"It did not occur to me that my son would drown because he didn't know water safety," she says. "Josh was never taught the basic life skill of learning how to swim."

When he was 3, Muhammad ran into a river at a family reunion and would surely have drowned. But his father, who learned to swim in the ponds around his hometown of Winnfield, Louisiana, dived in and saved his son's life.

No one else there that day knew how to swim.

Swimming is a lot like reading in that it's so much easier to learn as a child. Yet, for a variety of reasons, getting in the water is not a priority for many black families in America.

For many years, segregation kept black people out of public pools and beaches. Later, sham studies claimed  African-Americans were less buoyant and, therefore, more disadvantaged in the water than whites.

Over generations, as many blacks were kept out of the water, some developed a fear, says Carol Irwin, a health sports sciences professor in Memphis, Tennessee, who researched the issue for USA Swimming. Many were too afraid to let their children learn to swim.

The people Irwin interviewed for her research cited other reasons as well for not getting wet.

Some said they got no encouragement from their parents or other elders in the family. Or that it was a matter of not getting their hair wet.

In black culture, a richness of hairstory

Some people complained that the chemicals in swimming pools, as well as the salt in the ocean, made their skin dry and ashen.

Others cited difficulty in accessing public pools or having no money to pay for swim classes, a common problem  Butts is trying to combat in Ohio.

Muhammad says he got lucky when his mother, Jessica, got a job as a locker-room attendant at a pool in a public housing project in downtown Atlanta.

She collected dirty clothes and put them in baskets. She was one step up from a janitor.

Muhammad was 7 then and often sat and watched his mother work. One day he got into the pool. 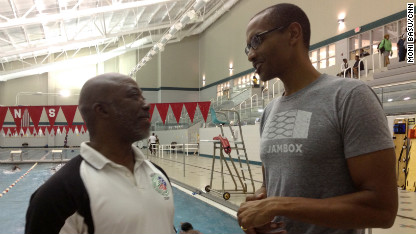 He learned to swim and later became a lifeguard and raced with the Dolphins, Atlanta's first inner-city team. By the time he neared graduation, Stanford University in California offered him a full swimming scholarship.

Swimming erased his fears and gave him confidence. In the water, he felt the whole world was his.

"Think about it," he says. "It's a daunting experience for a child who can't swim to get into the water. To overcome that is huge. There's nothing else that's as binary as live or die."

All the kids at the Adamsville Natatorium know Muhammad — the trailblazer in the water. They need a hero like him, Wilcox says. In the YMCA-funded research she conducted for USA Swimming, people told her that it would take more than an informational flyer to put their kids in the water.

They wanted an advocate, someone they could trust. This was a matter of life and death, after all. Jackson, the coach, says he wants to give his students a head start in life, just as he did for Muhammad.

Learning to swim is so much more than being able to move in the water, he says. It's about self-esteem, healthy eating, building good character and discipline — it takes a lot of will power to swim 335 yards three days a week.

The students' mothers say they've noticed big changes. There's a high correlation, they say, between their children's swimming skills and how they perform in the classroom.

Several of the kids attend elite, private schools in Atlanta such as The Paideia School and The Westminster Schools. Their moms hope they, like Muhammad, will find their way to a reputable university, whether through their strokes in the water or their grades in the classroom.

"I never learned how to swim," she says. "But I always had this fear my kids might drown." 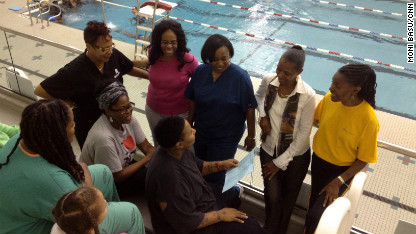 The moms waiting at swim practice say it's time well spent for their children.

On this evening, half the moms who are waiting don't know how to swim.

They sit and laugh and joke — they're part of a mom's club that's formed from all the hours they spend together. They don't mind giving up hours in their long days.

Melissa Jones brings her daughter Ariel, 14, who began swimming when she was 6. Jones' primary goal was fitness. Ariel took to the water and now races at swim meets with the Dolphins.

Jones says the mothers discuss how to promote Adamsville's swimming program so that many more kids will take advantage.

Some of the mothers say they have pools closer to their house, but it's important for their children not to be the only black kid in the pool. That's something that happens more often than it should, says Tina Braboy.

"There are so many stereotypes that black kids can't swim," Braboy says, looking down at the pool below her: blue water and brown skin. Most of the students here are African-Americans.

Braboy thinks it's a good thing for her daughter Bruntie to learn to swim with kids who look like her. And a good thing to Muhammad as inspiration.

What really sways teens not to drink, drive?

Cast your vote: CNN Hero of the Year