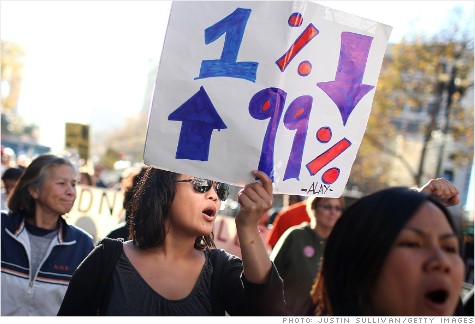 What it takes to be a one percenter

NEW YORK (CNNMoney) - It doesn't take a million bucks to get into the top 1%.

In fact, it took a little less than $370,000 in adjusted gross income in 2010 to make it into this elite group, according to newly released data from the Internal Revenue Service. That's up slightly from the $352,000 the year before.

The top 1% have been in the spotlight since Occupy Wall Street protesters first began camping out in cities across the U.S. last fall. The presidential campaign also centered on the haves and have nots, with President Obama calling for tax increases on the rich and challenger Mitt Romney arguing that taxing the wealthy would hurt the economy. 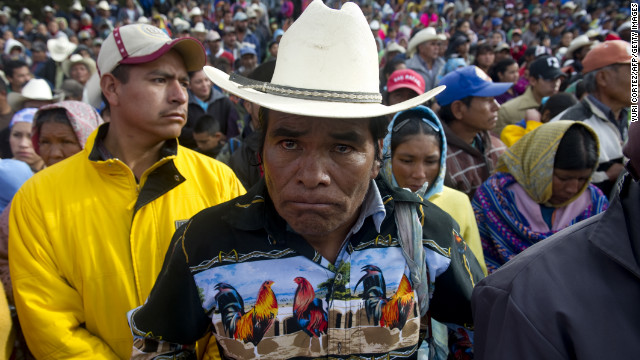 (CNN) - Mexico City, home to 20 million people, represents the paradox of the modern Mexico, the side-by-side juxtaposition - in everything from politics to architecture - of old and new.

Turn a corner, and you'll see a church that is 300 years old. Turn another, and you can get Wi-Fi in a Starbucks.

For example, when it comes to forgiving the corrupt Institutional Revolutionary Party (also known by its initials, PRI), whose leaders brutalized the Mexican people and plundered the country for much of the 20th century, they have short memories; they recently returned the PRI to power by electing Enrique Pena Nieto to the presidency. He takes office December 1.

But when it comes to the aftermath of the U.S.-Mexican war, which lasted from 1846 to 1848 and resulted in the United States seizing half of Mexico's territory - the modern-day U.S. Southwest - Mexicans' memories are long, and forgiveness isn't easy to find. Even after all these years, in diplomatic circles, you still hear talk of the "sovereignty" issue - which, loosely defined, means the constant effort by Mexico to keep the United States from meddling in its domestic affairs and the need for the U.S. to tread lightly. 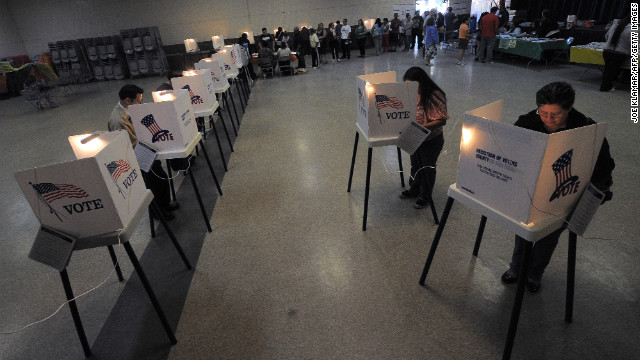 Editor's note: Editor’s Note: Ray Salazar is a National Board Certified English teacher in the Chicago Public Schools. He writes about education and Latino issues on the White Rhino Blog. Follow him on Twitter @whiterhinoray.

By Ray Salazar, Special to CNN

(CNN) - Finally, Republicans and Democrats know that they need more than mariachis playing behind them to win the Latino vote. By now, almost everyone heard about the Latino influence this presidential election.

The signs were everywhere. Maybe this is the 2012 cosmic event predicted by the Mayan calendar. Now, President Obama must recognize Latino views as he moves forward with economic recovery and immigration policy and farther with education reform.

None of the parties should have been surprised by the Latino vote. On October 7, CNN’s “Latino in America: Courting the Latino Vote” reported that more than 60,000 Latinos turn 18 each month across the country, and we care about more than immigration. When Latinos were given a choice between what’s more important, immigration or the economy, 74% chose the economy.

Obama’s modified DREAM Act did, though, help secure 71% of the Latino vote. Romney’s unclear view of immigration reform contributed to only 27% of his Latino vote.

More notably, the Latino vote for Obama exceeded the national Latino average in some battleground states: 87% in Colorado, 80% in Nevada and 82% in Ohio.

These votes indicate that the conversations need to change. For too long, education reform remained a black and white issue, racially and politically. Our educational system as is does not work, especially not for Latinos. According to the National Center for Education Statistics, the Latino dropout rate is almost double that of African-Americans and about three times higher than that of whites.