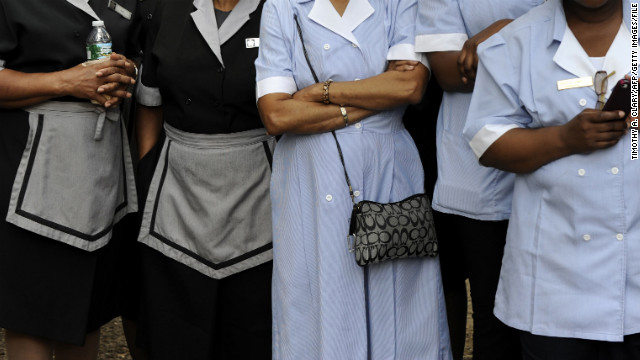 Nannies, house cleaners and caregivers play a central role in the U.S. economy, the report said, but hidden from public view, they are not compensated adequately and are often abused.

It found that low pay was a systemic problem in the domestic work industry - 23% of domestic workers are paid below the state minimum wage - and few receive any benefits such as health insurance or paid sick days. For live-in workers who are closest to their employers, the situation is worse - 67 % of them are paid below minimum wage.

The Fair Labor Standards Act, which guarantees minimum wage, overtime and sick and vacation pay, does not apply to domestic workers.

Poo said she found it devastating and painful that such a huge percentage of domestic workers make less than minimum wage.

"The upshot is that the workers that we have to take care of our families and homes don't earn enough," she said. "They work in extremely unpredictable and vulnerable conditions. And that's not good for anyone."

Domestic work in America carries the legacy of slavery with its divisions of labor along lines of race and gender, the report said.

The problems also stem from a history of women's work being devalued, said the report's co-author Nik Theodore, an assistant professor at the University of Illinois at Chicago.

"It's often not regarded as work," he said.

It's not far-fetched to liken some situations to modern-day slavery where workers are isolated in people's homes, coerced into back-breaking labor, Theodore said.

"Working behind closed doors, beyond the reach of personnel policies, and often without employment contracts, they are subject to the whims of their employers," the report said. "Domestic workers often face issues in their work environment alone, without the benefit of co-workers who could lend a sympathetic ear.

What distinguishes domestic workers from others is their personal relationship with their employers, making the abuses all the more baffling, the report said.

Hailed as the first of its kind, the survey was based on interviews with 2,086 domestic workers from 71 countries in 14 metropolitan areas across the United States. It was funded by the Ford Foundation, the Open Society Foundations and the Alexander Soros Foundation.

The number of domestic workers in the United States increased in the past few years to 726,437, according to the U.S. Census, though Tuesday's report suggested that number was far higher since the Census Bureau does not take into account workers placed by agencies or those who work for private cleaning companies such as Merry Maids. Undocumented workers are also probably undercounted in the census.

"Both U.S.-born and immigrant domestic workers, predominately women of color, work in an array of circumstances," the report said.

"A few staff the homes of the terrifically wealthy, serving the 1% in homegrown, contemporary versions of 'Upstairs/Downstairs' and 'Downton Abbey.' Many, many more work in the homes of busy, middle-class professionals who have sufficient income and wealth to hire help to do the chores that would otherwise consume their limited time."

Others assist people of lesser incomes, stopping in to clean or help an elderly person with chores.

But many domestic workers struggle to take care of their own families, the report said. It found that 60% of domestic workers in America spend more than half their income on rent or mortgage payments; 20% said there were times in the month before they were interviewed that there was no food to eat in their homes.

Live-in workers earned less than those who did not, the report said.  Live-in nannies earned a median wage of $6.76 an hour compared with $11.55 for those who lived elsewhere. Live-in caregivers made $7.69 an hour while others made $10.

The survey found that 65% of domestic workers have no health insurance, and less than 9% work for employers who pay into Social Security.

The report recommends policies that rectify the exclusion of domestic workers from employment and labor laws. Theodore said nannies, house cleaners and caregivers ought to earn minimum wage and be offered benefits. And they deserve a safe and healthy working environment.

Theodore, who co-wrote the report with Linda Burnham of the National Domestic Workers Alliance, said even he was surprised at the depth and breadth of abuse of domestic workers. He interviewed Anna, who since then has left her employer, and spoke with many others in her situation. One woman even told him her employer pulled a knife on her.

It raises questions about immigration and the economy, Theodore said. "It speaks to how we as a society are going to care for our children and elderly."