Chi Omega apologized for this photo after some found it offensive.
December 7th, 2012
06:17 PM ET

(CNN) - Officials at Penn State published an open letter this week about an incident that has brought the university under scrutiny once more.

Members of the university's Chi Omega sorority chapter celebrated Halloween at a Mexican-themed party. They wore sombreros and ponchos and pasted fake mustaches on their faces. They held signs that said: "Will mow lawn for weed + beer." Another sign said: "I don't cut grass. I smoke it."

Then they took a photo and posted it online. Outrage spread over the insensitive nature of the photo. Some said it perpetrated stereotypes and were culturally insensitive. Latino students on the Penn State campus demanded a direct apology from Chi Omega, which issued a statement of regret to the college newspaper.

The university president, the president of the board of trustees and other officials expressed their own feelings of deep disappointment.

"How any constituent groups or individuals in the university could behave with such insensitivity or unawareness is a question we must both ask and answer," they said in a letter Thursday.

"Our university is a place of learning and discovery, and there certainly are lessons to be relearned, or even discovered for the first time, from these incidents," the letter said. "The simplest of those lessons is that costumes that include blackface, or that parody or imitate a person or groups of people, are always offensive to someone. They convey either a lack of awareness about the human condition and human sensitivities or, worse yet, disdain for the thoughts, feelings, histories and experiences of others. They suggest a failure to empathize or even a failure to think. They make all of us small."

The incident comes in the wake of this year's conviction of former Penn State assistant football coach Jerry Sandusky for sexually abusing 10 boys over a period of 15 years. He was sentenced to a minimum of 30 years in prison. The scandal led to the dismissal of legendary head coach Joe Paterno, who died only weeks later, and severe NCAA penalties against the school's storied football program.

Reaction to the Chi Omega story, however, has not all been of dismay or outrage. END_OF_DOCUMENT_TOKEN_TO_BE_REPLACED

(CNN) - Along the lush sea-islands and the Atlantic coastal plains of the southern East coast of America, a distinctive group of tidewater communities has stuck together throughout the centuries, preserving its African cultural heritage and carving out a lifestyle that is uniquely its own.

The Gullah/Geechee people are direct descendants of West African slaves brought into the United States around the 1700s. They were forced to work in rice paddies, cotton fields and indigo plantations along the South Carolina-Georgia seaboard where the moist climate and fertile land were very similar to their African homelands.

After the abolition of slavery, they settled in remote villages around the coastal swath, where, thanks to their relative isolation, they formed strong communal ties and a unique culture that has endured for centuries. 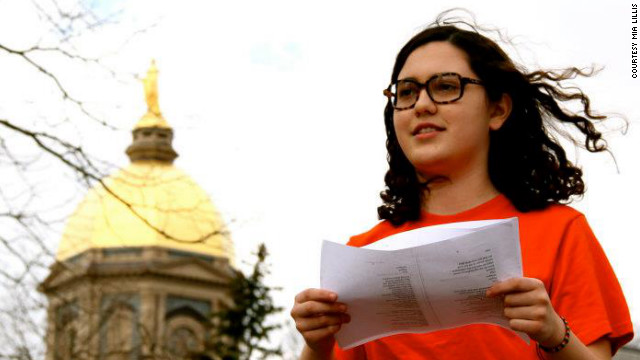 (CNN) - Mia Lillis knew that she was gay when she was 12. She felt lucky to attend a public high school in Austin, Texas, that was highly supportive and had a gay student alliance. Then she arrived at the University of Notre Dame.

She enrolled there because Notre Dame's reputation as a premier Catholic school appealed to her family. But from the very first day, Lillis was scared.

She searched for a gay and lesbian student organization. There was none. She sought out literature for gay students. Again, nothing.

"It gave me the impression that Notre Dame didn't care about queer students," said Lillis, 20. "It was pretty intimidating."

She went back in the closet. She even considered transferring. "I would say a lot of gay students think that way," she said.

But this week, Lillis celebrated after Notre Dame announced that it will create services for students who identify as lesbian, gay, bisexual, transgender or questioning, as in those who are still figuring out their sexual identity.

After a five-month review process, Notre Dame made the recommendations in a comprehensive pastoral plan that the university said is grounded in its Catholic mission.

“As articulated in the university’s ‘Spirit of Inclusion’ statement, Notre Dame’s goal remains to create and sustain a welcoming and inclusive environment for all students, and I am confident that this multi-faceted, pastoral approach represents the next step in advancing our efforts toward this aspiration for our GLBTQ students," said the Rev. John Jenkins, president of the university. END_OF_DOCUMENT_TOKEN_TO_BE_REPLACED

Soledad O'Brien: I’m black. I’m Latina. My mom is Cuban. Afro-Cuban. My dad is white and Australian. And I think because of my job, often a question like "How do you identify?" is really not about the question. It’s always "What side are you on?" "What perspective do you bring?" END_OF_DOCUMENT_TOKEN_TO_BE_REPLACED