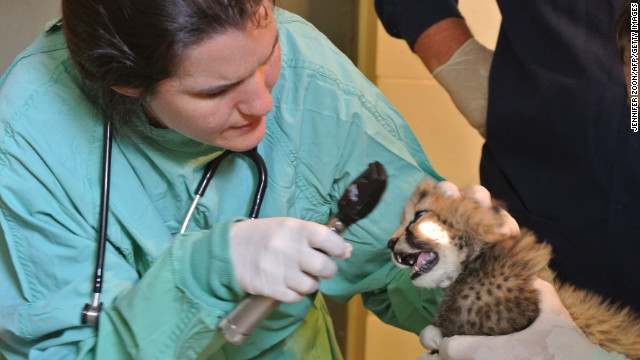 Katharine Hope examines a baby cheetah at the National Zoo. About 50% of veterinarians are women, according to census data.
December 12th, 2012
10:45 AM ET

Women make gains in the workplace

(CNN) - Dorothy Segal went to veterinary medicine school at a time when she was very much a minority. She remembers being one of two women who graduated in her class in 1943.

Now 96, Segal recalled what the dean of the Michigan State University veterinary school said to her at the time: "Go back to the kitchen."

Segal went on to have a successful practice, treating everything from birds to big cats in the circus.

They used to say treating animals was no job for a lady. So Segal never wore pants.

"I made myself feminine," she said.

Segal was a trailblazer for women in her profession. When she began practicing in 1944, there were about 55 women vets in America. She was part of the first real growth spurt in female vets, who multiplied after the 1972 Equal Employment Opportunity Act.

Today, there are as many female as there are male veterinarians. It's a field in which women have excelled more than others.

Women's representation increased greatly in several occupations from 2006 to 2010, according to the latest U.S. census data.

Bonnie Beaver, a professor of veterinary medicine at Texas A&M University, said an anecdotal reason for more women going into medicine is that they are more caring. So why have the numbers of women in human medicine not spiked in the same way?

"That has do with requirements on education," said Beaver, a former president of the American Veterinary Medicine Association.

Practicing as a vet does not require a residency like human medicine. Nor is it an all-consuming career. Women have to make time for children. Often they are caring for elderly relatives, Beaver said, or have other family obligations.

"Many, many surveys have shown that men, while they talk the talk, they don't walk the walk," Beaver said. "That certainly has changed, but (family) still is primarily the responsibility of women."

Still, the gains in numbers of women in certain professions have been tremendous, said Heidi Hartmann, president of the Institute for Women's Policy Research. Women, for instance, account for a third of all lawyers now, the census data showed.

The gains began after universities opened up law and medicine schools to women - Hartmann remembers only six women in her husband's 1969 Yale law class. The women's movement and equal opportunity laws added to the growth, she said.

But while women have diversified in the workforce, Hartmann said they still earn less than their male counterparts.

In 2011, median weekly earnings for female full-time workers were $684, compared with $832 per week for men, according to the institute.

Women do well in the public sector - teaching, law enforcement, military and especially, the civil service - where pay information is open and less likely to be the result of discrimination, Hartmann said.

Women have also not made significant strides in blue-collar professions in which, typically, an employee is hired by a personnel office and trained by the employer. They include carpentry, plumbing and office machinery repair.

"A lot of these occupations have preconceptions," Hartmann said. "In some instances, it's bias. But in many cases, it's just the way it has been."

More women (3.8 million) are employed as secretaries and administrative assistants than in any other occupation, the latest census data showed. About 2.8 million are employed as cashiers and 2.7 million as elementary and middle-school teachers.

Secretary has been the largest occupation category for women since the 1970 census, which was the first repository of equal employment opportunity data. But Hartmann pointed out that the numbers for women in that profession have remained about the same.

"So, there's less concentration," she said.

It used to be that 75% of women were employed in female-dominated professions, Hartmann said. Now, the number is down to half.

Segal, the veterinary pioneer, said she encourages young women to take up the profession. She still has her license to practice, though she has been long retired. Animals, she said, miss her.