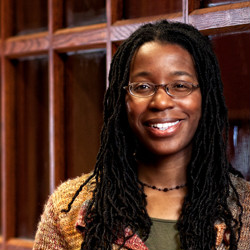 Editor's note: Historian and author Tiya Miles is a professor at the University of Michigan's Afroamerican and African Studies department and a 2011 MacArthur genius award recipient.

(CNN) - In the documentary film "Black Indians," a man who appears to be African-American recounts his delight at eliciting shocked looks from strangers when he launches into a conversation with his wife in the Cherokee language.

The man who tells this story is Cherokee as well as black and a member of the Cherokee Nation of Oklahoma. His is just one among thousands of examples that show diversity has always been a core aspect of African-American identity.

That diversity has been rich - from the moment when Africans from different tribes, cultures and language groups were captured as slaves and transported to North America to the present day, when African-Americans live in various regions and intermarry with members of other ethnic groups.

The evidence of this diversity is so obvious that it may seem at times invisible.

It exists not only in linguistic diversity - in African-American fluency in English, Spanish, French, Japanese, Cantonese, American indigenous languages and so on - but also in the regionalisms of African-American cuisine from coastal rice and seafood dishes to Southern barbecue sauces.

Despite the gradations and variations that characterize African-American identities, one unfortunate point of consistency seems to pervade black experiences.

A preference for lighter skin within the group is the obvious and yet simultaneously hidden counterpart to a long experience with external racism that enforced a notion of white supremacy.

Because light skin is closer to “white” skin, possessing lighter skin has functioned as an asset for some African-Americans. This asset could be leveraged outside the group in a dominant white society that preferred its own likeness, as well as inside the group because of the status and access it conveyed.

Light skin became such an asset within black communities that some middle- and upper-class churches and social clubs discriminated against fellow blacks who were deemed too dark to belong.

This self-policing of blacks by blacks took the form of the now infamous paper bag tests, in which a person had to be lighter than a paper bag to gain entry to some elite African-American institutions. Blacks who passed the test and entered these privileged circles could pass that privilege on to their children in the form of greater social capital.

Preferences for lighter skinned African-Americans continue today, both within black communities and in American popular culture. In 2007 a Detroit nightclub advertised a party promotion for which “light-skinned women” were invited to come for free.

But most instances of contemporary colorism are far more subtle. Ask yourself: How many darker skinned versus lighter skinned blacks do you see starring in films or on TV, anchoring news shows, or running companies and universities? (You can only count Oprah Winfrey once.) The tally, though certainly better than it would have been a decade or two ago, still dips toward the lighter side of the scale.

This difficult history and contemporary circumstance leads to painful realities for African-Americans on both ends of the color spectrum.

Brown-skinned and dark-skinned blacks are frequently made aware of their color status in moments of realization that I will call color cataclysms.

For me, one such moment occurred when I was in high school and overheard that a white male classmate was referring to me as “dark meat,” a descriptor that was demeaning with regard to color as well as gender.

Another even more painful moment came soon after I had given birth to my twin daughters, who differed greatly in color. A co-worker who came to our home to see the new babies commented about my lighter-toned daughter: “Look how light she is. Oh, she’s the pretty one.”

Moments like this stop the heart and serve as painful reminders of continuing prejudice in a society that still overvalues whiteness 150 years after the formal destruction of a race-based system of human bondage.

The privileging of light skin in African-American communities is often tacit now, but is nevertheless painful and real.

With a full recognition that lighter skin equates to privilege, some darker skinned African-Americans have struggled to accept their lighter sisters and brothers as authentically black.

At the same time, some lighter skinned African-Americans struggle to feel fully accepted among other African-Americans and to resist the regular scrutiny in dominant society that sometimes leads to rude questions like: “So, what are you?”

This experience of feeling excluded and interrogated is especially intense, I am told, for those African-Americans who are not racially identifiable as black and could, as was said in an older parlance, “pass for white.”

The often hidden pain about skin color privilege in black experience recently exploded in the controversy over whether actress Zoe Saldana should portray soul singer Nina Simone in a biographical film.

Does it matter that a light-skinned actress was selected to play a dark-skinned woman who expressed in the song “Four Women” her own critical consciousness of how color has affected black women’s lives?

Yes, I believe it does matter, even though I want every African-American actress to have greater opportunity in a movie industry that still prefers white performers.

"The colored race is just like a flower garden, with every color flower represented,” Alice Walker famously wrote in her book "In Search of Our Mothers’ Gardens."

As a group made up of many groups, rich in our vibrant diversity, African-Americans still strive to embrace our true colors. In order to fully realize the multiplicity of our identities, blacks in America must confront the reality of colorism and reject the injustice of second-class skin color.