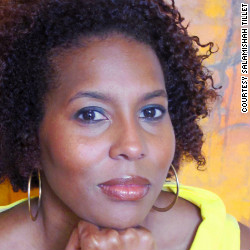 Editor's note: Salamishah Tillet is an assistant professor of English and Africana studies at the University of Pennsylvania ­and author of "Sites of Slavery: Citizenship and Racial Democracy in the Post-Civil Rights Imagination." She is co-founder of the charity, A Long Walk Home Inc., which strives to end violence against girls and women.

By Salamishah Tillet, Special to CNN

“How can you ignore such a huge part of American history?” the director recently told Newsweek magazine. “Hollywood didn’t want to deal with it because it was too ugly and too messy.”

On this point, he is right.

Unlike the preponderance of movies on other historical atrocities - including the Holocaust, which Tarantino tackled in "Inglorious Basterds" - there have only been a handful of Hollywood films made on American slavery. And none were directed by an African-American.

Unfortunately, the vast majority of those movies were racist.

Dating back to D.W. Griffith’s “The Birth of a Nation” in 1915, white slave masters were heroes and formerly enslaved African-Americans were villains.

“Gone With the Wind,” the 1939 box-office smash, did no better as slave characters like Prissy, Mammy and Uncle Peter appeared as docile and happy servants.

These two films alone dominated all subsequent Hollywood representations of slavery until late 20th-century movies such as “Glory,” “Amistad” and “Beloved” depicted African-Americans as resistors.

But films on slavery have never been about the past alone.

They are influenced by the way we see our racial selves in the moment and also help shape those images. More often than not, slavery is the historical backdrop against which filmmakers and audiences can gauge their own racial problems or progress.

“Django Unchained” is no different. Though set two years before the Civil War, the movie is very much Tarantino’s 21st-century racial fantasy.

Actor Jaime Foxx opens up on his role as Django

There is much to criticize in this film: the excessive use of the N-word, gratuitous gun violence and its male dominance. Women are objects of apathy or sympathy and are not as nearly as complex or charismatic as any of the male characters. This is very much a movie about how men, white and black, navigate America’s racial maze.

And there is much to defend.

The slave-turned-bounty hunter Django, who rescues his wife from slavery, is an African-American hero never seen before on the big screen. He alone is capable of the brilliance, moral courage and swagger needed to resist slavery.

And yet his exceptionality comes at a price: Unlike "Amistad’s" Cinque or "Beloved’s" Sethe, he seems to exist in a vacuum. Most of the slave characters he meets are not his equals; they are flat, naive, and as in awe of him as the audience. And they barely dent racial stereotypes.

The emphasis on black exceptionalism is not just in Tarantino’s film. It has been a problem in the post-civil rights era, one that should be defined as much by the everyday killings of youths such as Trayvon Martin as much the re-election of the first African-American president.

Instead, racial progress is too often determined by the exceptional success of people such as Barack Obama and Oprah Winfrey.

It is true, as Princeton professor Imani Perry writes in her book “More Beautiful and More Terrible,” that “the African-American figure of note and achievement is evidence for, and in some instances a sign of, the chipping away at the infrastructure of white supremacy.”

But our constant celebration of their individual success as the only proof of racial progress is too risky.

Perry warns: “Either the person or people are seen as role models and lauded for their attainments and transcendence of the 'bear' of race, or they are viewed as inauthentic, illegitimate, and threatening.”

Conservatives tout “exceptional African-Americans” to deny contemporary structures of racism, and liberals applaud them for transcending race. In both cases, the ongoing racial inequities that affect the majority of African-Americans today are seen as a thing of the past, as a bygone of the era of slavery.

We should be aware that “Django Unchained” is a film that could not have been made at any other racial moment. But by privileging the few, we do not have to deal with the severe racial inequalities that most African-Americans confront in education, employment, health care and the criminal justice system.

As we cheer Django on in his revenge, we ought to ask ourselves: What happened to all the other slaves in America? Those who had neither Django’s guile nor guns? If we are serious about avenging the past, we must deal with the legacy of their lives in our present.

The opinions expressed in this commentary are solely those of Salamishah Tillet.