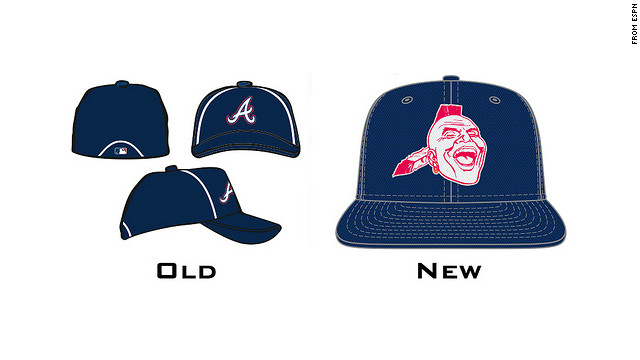 "We will unveil the program when it is finalized," the MLB statement said. "We do not know where (ESPN) obtained the designs. We can not make them available to CNN because they are not finalized or approved."

The screaming Indian was part of the Braves logo when the team moved to Atlanta from Milwaukee in 1966. It was retired in 1989.

The team also had a mascot, Chief Noc-a-Homa (knock a homer), who wore Native American dress and war paint.

The possibility of a new cap design drew fire from those who believe the image caters to unhealthy stereotypes of Native Americans.

Kevin Gover, director of the Smithsonian Institution’s National Museum of the American Indian, said he was deeply disappointed that the Braves may be choosing to go backwards.

Gover, 57, said he grew up with all sorts of stereotypes. He was hoping his grandchildren wouldn't.

"What this does is contribute to the casual racism native people are subjected to in our society," said Gover, a member of the Pawnee Nation.

The screaming Indian is an image of an imaginary Indian, Gover said. It and other stereotypical sports mascots, he said, do not portray Native Americans for what they truly are.

The controversy of sports mascots is, of course, not new. U.S. professional and collegiate sports teams have used Native American logos and names for years. Baseball's Cleveland Indians, for instance, continue to feature a smiling Indian dubbed Chief Wahoo, criticized as a racist caricature.

Sometimes this happens with the blessing of Native American tribes, and other times - like with the NFL's Washington Redskins, a term that many feel advances a demeaning stereotype - they have denounced as effectively racial slurs.

The NCAA imposes a ban on offensive Native American mascots and earlier this year, voters dumped the University of North Dakota's Fighting Sioux mascot. Florida State University's use of Seminole imagery is allowed because it is supported by the the state's Seminole Tribe.

Also this year, Oregon prohibited public schools from the use of Native American names, symbols or images as mascots. The names on the banned list include: Redskins, Savages, Indians, Indianettes, Chiefs and Braves.

Gover said a lot of people think it's OK to use Native American imagery. That was evident on the comments posed on the Atlanta Journal-Constitution's blog post about the Braves design:

User Dedoh wrote: "I love the old Braves uniforms. I could care less that someone is offended over the new logo. Too many people are offended by insignificant things that have no bearing on their daily life. The offended can watch another less offensive team. Go BRAVES!!!!!!!"

Slick Rick wrote: "This isn’t bad … but 'Redskins' is. That name should go away forever."

Other fans weighed in on an online forum on MLB.com, baseball's official website.

“How can you not love this?” wrote one commenter, with the moniker NELSKOF.

But one person, writing with the name Shag23, questioned whether the change was worth it.

“This new hat will draw a lot of attention, just maybe the wrong type,” the commenter wrote.

But Gover said such imagery leads kids to grow up thinking that all Native Americans look menacing or do the tomahawk chop, the customary "rally" routine of Braves fans.

"It's nice that they named a team after us but we don't behave like that," he said. "It's hard to see what honor there is in using that imagery."

CNN's Tristan Smith and David Close contributed to this report.

Tell us what you think of the Braves decision below. Is going retro a bad thing in this case?