(CNN) - When Hannah Johnson wrote President Lincoln in the summer of 1863, she expressed the concerns of any mother with a son fighting a war.

But she had a special request: “I am a colored woman and my son was strong and able as any to fight for his country and the colored people have as much to fight for as any…. Will you see that the colored men fighting now, are fairly treated. You ought to do this, and do it at once.”

On January 1, 1863, the Emancipation Proclamation became the first authorization by an American president to enroll Johnson's son, and other black men, as legal soldiers for the United States military.

Emancipation and the enlistment of black soldiers were not President Lincoln’s initial impulse. He wanted to make a gradual change, as he wrote in this letter explaining his shift to an advisor:

When, in March, and May, and July 1862 I made earnest, and successive appeals to the border states to favor compensated emancipation, I believed the indispensable necessity for military emancipation, and arming the blacks would come, unless averted by that measure. They declined the proposition; and I was, in my best judgment, driven to the alternative of either surrendering the Union, and with it, the Constitution, or of laying strong hand upon the colored element. I chose the latter.

“Republicans understood that they needed blacks to be agents of change for the process,” said James Oakes, author of "Freedom National: The Destruction of Slavery". “The North couldn’t win the war without black soldiers.”

Those soldiers, and the proclamation, became an enduring symbol of freedom.

But on the 150th anniversary of the signing of the Emancipation Proclamation, a historical document that symbolizes the beginnings of freedom for individuals once deemed property, historians say myths persist about what the policy did, and did not, do.

“Slavery didn’t die on January 1, 1863, but it was the death knell that slavery would die if the Union won the Civil War,” said Eric Foner, author of "The Fiery Trial: Abraham Lincoln and American Slavery".

Here are three myths that persist about the Emancipation Proclamation. END_OF_DOCUMENT_TOKEN_TO_BE_REPLACED

(CNN) - Jim Scales and William Tasker have been a couple for 35 years, but only on Tuesday were they able to legally marry, thanks to Maryland's new same-sex marriage law, which went into effect with the new year.

Maryland was among three states this past November where voters approved laws allowing same-sex marriages.

At Baltimore City Hall, a celebration erupted with the first official marriage ceremonies just after midnight, similar to celebrations when laws went into effect in Washington and Maine in December.

Scales and Tasker made up the first couple in Baltimore to marry under the new law.

"Jim and I met in 1977 and at that time I just didn't really believe that gay people would ever see the day when they could marry," Tasker told CNN affiliate WBAL.

Scales agreed: "This is as happy as I've ever been, to be able to spend the rest of my life with Bill - legally - and to show the rest of the gay community that this can be done."

Seven couples exchanged vows in Baltimore in the first hours of the new year. 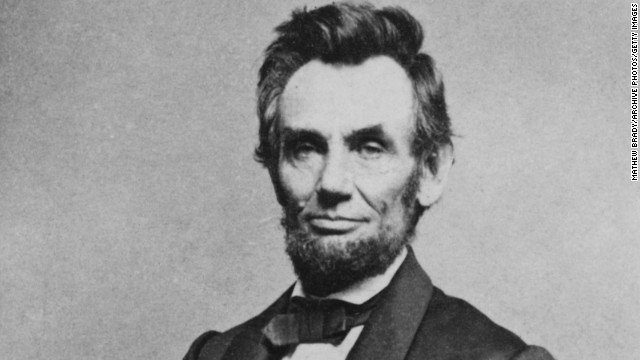 Wade Henderson thinks the modern Republican Party should look to Abraham Lincoln for some inspiration.
January 1st, 2013
09:38 AM ET

Opinion: GOP, time to rebrand in the image of the 'Great Emancipator'

By Wade Henderson, Special to CNN

(CNN) - On January 1, the nation will commemorate the 150th anniversary of the Emancipation Proclamation, which legally freed slaves in the secessionist Southern states. Meanwhile, thousands of theaters will still be presenting the film "Lincoln," portraying the soon-to-be-martyred president's efforts in January 1865 to persuade the House of Representatives to pass the 13th Amendment, outlawing slavery throughout the nation.

Coming at a time when many Republicans are seeking to rebrand their party, these commemorations of the first Republican president raise this question: Why not refashion the Grand Old Party in the image of the Great Emancipator?

Steven Spielberg's historical drama, as well as the biography upon which it is based, Doris Kearns Goodwin's "Team of Rivals: The Political Genius of Abraham Lincoln," both remind today's Americans that Lincoln was not only a moral leader but also a practical politician. The political identity that Lincoln forged for the fledgling Republican Party - uniting the nation while defending individual rights - was a winning formula for half a century, with the GOP winning 11 of 13 presidential elections from 1860 through 1908.