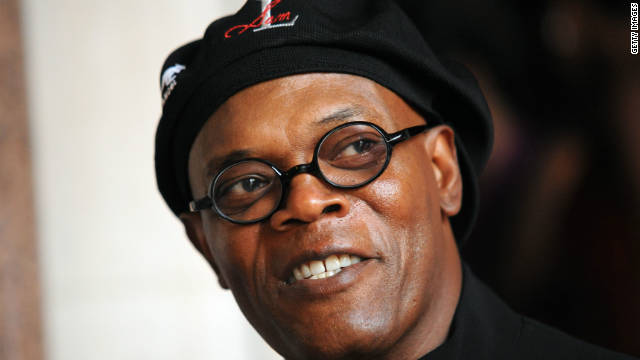 (EW.com) - No one knows how to make white men squirm quite like Samuel L. Jackson.

A post on Reddit last night has unearthed a prime example. Two weeks ago, the "Django Unchained" cast sat down with Jake Hamilton, host of Houston's Emmy-winning film show Jake's Takes, at a press junket.

Things went smoothly enough until Hamilton approached Jackson with a question about the movie's controversial use of the "n-word." Jackson insisted that Hamilton, who is white, say the word out loud; after Hamilton repeatedly refused, they moved on. It was uncomfortable.

"The most awkward moment was just seeing everyone in the room freeze, and waiting to see what my reaction was going to be," Hamilton says today.

The internet reaction has been mixed. Many commenters claim that Hamilton should have simply said the word, while others applaud the reporter for not caving to Jackson's demand. Hamilton says that his decision was in the best interest of the show and the network.

Editor's note: Lauren Wolfe is an award-winning journalist and the director of Women Under Siege, a Women's Media Center initiative on sexualized violence in conflict. She is the former senior editor of the Committee to Protect Journalists, and blogs at laurenmwolfe.com. Follow her on Twitter, @Wolfe321.

By Lauren Wolfe, Special to CNN

(CNN) - On December 16, a young medical student in one of India's major cities was gang-raped, her body destroyed by the bodies of the men who allegedly assaulted her and also by the rusting metal bar doctors say they used to penetrate her. The bar removed part of her intestines. The rest were removed in a hospital far from home where she struggled for her life for just a few days.

It has taken an attack that lies nearly outside of comprehension to prompt demonstrations, but the outcry has begun.

Over the weekend, women rose up in Nepal, protesting outside the prime minister's house against gender-based violence.

What are your experiences of being a woman in India? Send us your stories

Egyptian women have faced ceaseless sexualized violence since the start of that country's revolution, but are now protesting to stop the ever-present sexual harassment and assault.

According to Eve Ensler, the head of V-Day and One Billion Rising, a movement calling for women to rise up on February 14, 2013, and demand an end to violence, women in Somalia are planning what may be their first-ever major demonstrations against rape and violence.

This groundswell - what Ensler calls "a catalytic moment" - is the perfect chance for us to consider how we think about subjugation, rape, and degradation of women globally.