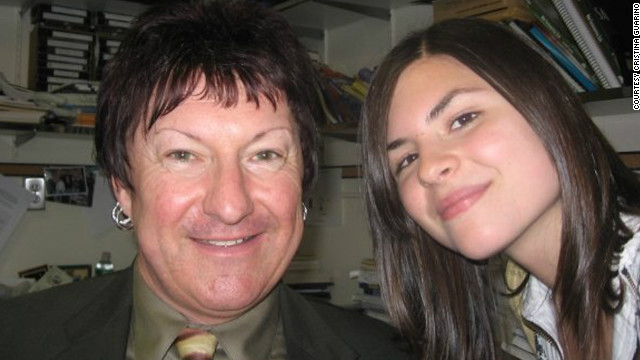 "We deny all the allegations," he said.

In the meantime, former students of St. Francis launched an online petition that describes Krolikowski as a beloved and well-respected teacher and urges the school to apologize.

Cristina Guarino, who started the petition on Change.org, said Krolikowski always had a "feminine edge," though it was nothing shocking. Some students speculated on his sexuality and wondered whether he was gay.

"I really never questioned his gender identity despite his somewhat feminized looks," she said. "It just didn't seem to matter, and it never affected his teaching style or his opinions. He never imposed anything on us."

She said Krolikowski's sex education class called Human Sexuality and Love - one that he developed 15 years ago -  was one of her favorites during her four years at St. Francis.  Krolikowski's gender identity never was an issue in class, she said. He was the kind of teacher who told jokes and acted silly in class to make students feel more comfortable talking about sex.

"I still laugh to this day when I remember it. Mr. K was someone who brightened our lives,” Guarino said.

Krolikowski said he was overwhelmed by the show of support from his students.

"I didn't realize I touched that many people," he said. "It makes me feel that my teaching career was worthwhile."

Krolikowski began teaching at St. Francis in 1980. Aside from his regular classes, he volunteered to lead students in many extracurricular activities that included music, performance of school liturgies and an international night and graduation ceremony.

His account of what happened to him is described in the lawsuit.

He says the school never questioned his abilities, loyalty or dedication to the Catholic faith. But that changed, according to him, in October 2011, when he was summoned to the principal's office to meet with Conway and Assistant Principal Patrick McLaughlin.

Krolikowski says he was informed then that a parent of a freshman student had complained about the teacher's appearance.

He admits his appearance is considered unconventional. But he said he always wore a suit and tie, and his personal grooming conformed to school standards. Former St. Francis students who have signed the petition agreed with that description.

But Krolikowski was asked to change his appearance after the complaint. That's when the teacher informed Conway and McLaughlin that he was transgender.

Krolikowski said in the lawsuit that he was then asked whether he would "appear as a woman" in the next school year and was told that he was "worse than gay." The school officials allegedly told Krolikowski that he could not be seen at public events.

The teacher wanted to remain at the school and said he would "tone down" his appearance by removing his earrings and French manicure.

He continued teaching his sexuality class and another called Social Justice that focused on people marginalized by poverty, race, ethnicity and sexual orientation. He says he received straight As on his next teacher observation form.

But at the end of the school year, in June, Krolikowski was summoned back to the principal's office. He was told, he alleges, that he had been insubordinate and that he had not changed his appearance enough to satisfy the school. Conway and McLaughlin relieved him of his duties and demanded a letter of resignation, Krolikowski says.

"I was shocked," he said Friday.

The lawsuit states that Krolikowski was unlawfully discriminated against because he did not conform to the school's perception of how a male should dress and act.

"His appearance hasn't changed very much, so no one understands why this happened," Guarino said. "It wasn't an issue for 32 years. Why is it a problem now? It seemed very sudden."

Carmelyn Malalis, an LGBT workplace lawyer with Outten & Golden LLP in New York, said the law has been used to protect transgender people.

Krolikowski's story has made headlines. And the online petition has grown to about 3,000 signatures.

One post from David Burkard in Queens Village, New York, said this:

"We the students/alumni/ and staff of Prep are supposed to be good 'Christians' and that means not only going the extra step to be kind to others, but also that we must be accepting and loving to EVERYONE. Mr. K always spoke out about public injustices, both domestic and international, and by doing so proved to be one of the MOST 'Christian' persons I've ever met.

"You cannot just fire someone because they 'don't reflect the values you wish to instill,' when clearly they do. The act of firing Mr.K has proved to me that the establishment is quite plainly ignorant, insensitive, and most importantly hypocritical. I was once a proud Terrier, but now I can honestly say I'm ashamed."