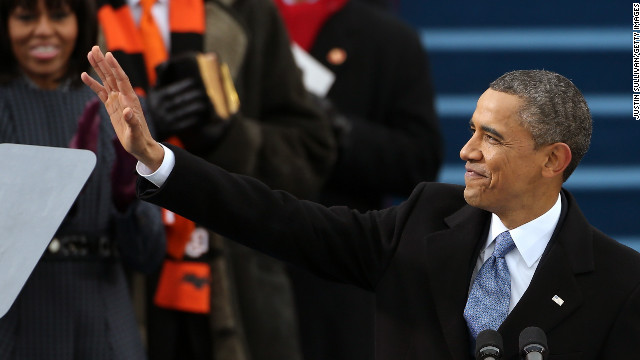 Three places that have come to embody social justice movements in America.

Three places that rolled off the tongue of President Barack Obama as he addressed the nation Monday after his ceremonial oath of office. And with their mention, Obama made a monumental statement.

"We, the people, declare today that the most evident of truths - that all of us are created equal - is the star that guides us still; just as it guided our forebears through Seneca Falls, and Selma, and Stonewall; just as it guided all those men and women, sung and unsung, who left footprints along this great Mall, to hear a preacher say that we cannot walk alone; to hear a King proclaim that our individual freedom is inextricably bound to the freedom of every soul on Earth."

Obama equated watershed moments of women's rights and African-American rights to gay rights. No other president has even mentioned gay rights in an inaugural speech, let alone mentioned it alongside other movements that forged a more equal America.

Seneca Falls, New York, was where the first women's rights convention was held in in 1848, giving rise to what Elizabeth Cady Stanton called the "greatest rebellion the world has ever seen." It led to political rights for women, including the right to vote.

In Selma, Alabama, state troopers fired on civil rights marchers in 1965 leading to the Selma to Montgomery march that was considered a pinnacle of that movement and solidified support for passage of the Voting Rights Act.

And Stonewall was a gay bar in New York' s Greenwich Village where in 1969, patrons stood up to harassment in a police raid. The incident became the signature moment of the gay rights movement.

“We were honored that the president included Stonewall among the historic events in American history that have made our union stronger," said Chad Griffin, president of Human Rights Campaign, a lesbian, gay, bisexual and transgender civil rights organization.

"Its inclusion is testament to the valiant contributions of LGBT Americans past and present who seek nothing more than to be treated equally by the country they love," Griffin said.

Monday, he went on to say: "Our journey is not complete until our wives, our mothers, and daughters can earn a living equal to their efforts. Our journey is not complete until our gay brothers and sisters are treated like anyone else under the law - for if we are truly created equal, then surely the love we commit to one another must be equal as well."

That line drew some of  the loudest cheers of the day.

Appropriate then, perhaps, that what followed the president's speech was a poem written and recited by Cuban-American poet Richard Blanco, who happens to be gay.