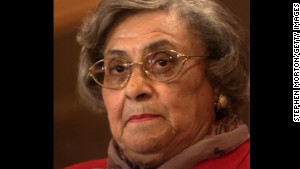 (CNN) - Essie Mae Washington-Williams, the biracial woman who revealed nine years ago she was the illegitimate daughter of former segregationist Sen. Strom Thurmond, died Monday, her family's spokesman said. She was 87.
Washington-Williams kept her father's identity secret until six months after Thurmond, a segregationist leader for decades, died in June 2003 at age 100.
"I never wanted to do anything to harm him or cause detriment to his life or to the lives of those around him," Washington-Williams said at a 2003 news conference, six months after her father died at the age of 100.

"I never wanted to do anything to harm him or cause detriment to his life or to the lives of those around him," Washington-Williams said at a 2003 news conference, six months after her father died at the age of 100.

She died at her Columbia, South Carolina, home Monday morning, according to Frank Wheaton. 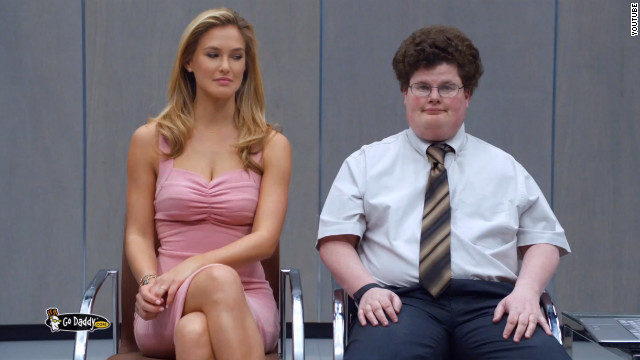 (CNN) - While this year's Super Bowl commercials ran the gamut from sentimental to silly, some were downright offensive to viewers who used the Twitter hashtag #NotBuyingIt to flag what they considered the most sexist spots of the night.

Web host GoDaddy.com earned more than 7,500 #NotBuyingIt tweets for its ad featuring an intimate smooch between supermodel Bar Refaeli and a bespectacled computer programmer, putting it at the top of the list of offenders, according to Miss Representation, the social activism nonprofit leading the Twitter campaign for the second year.

The "Perfect Match" and its "smart meets sexy" tagline drew criticism from men and women for "stereotyping programmers and objectifying women" in the words of one male Twitter user.

"@GoDaddy, continuing the tired stereotype that programmers are geeks, while women are sex objects. Disgusting," a female user tweeted.

Overall, #NotBuyingIt generated more than 10,000 tweets and reached more than 8 million people on Twitter during Sunday's Ravens-49ers showdown, a spokesman for Miss Representation said, citing statistics from Topsy and Hashtag.org.

Washington (CNN) – A day after pushing the administration's gun control proposals on the road in Minnesota, President Obama will sit down with groups to push for immigration reform Tuesday, White House officials said.

The president will meet with leaders of labor unions, including AFL-CIO President Richard Trumka and and Eliseo Medina, Secretary-Treasurer of the Service Employees International Union, as well as representatives of progressive groups, like the NAACP and the Center for American Progress, and key immigration reform groups.

The White House said the meeting will allow the president the opportunity to discuss how to get a bipartisan immigration reform bill passed this year and how it fits into his economic agenda.