Editor's Note: Alberto Ferreras is a New York City based writer and filmmaker, who created the "Habla" documentary series for HBO Latino, and co-creator of "El Perro y El Gato" for HBO Family. He is also the author of  “B as in Beauty” .

By Alberto Ferreras, Special to CNN

Lupe represented a whole generation of talented Hispanic actors who had been denied the chance to play anything but maids, thugs and drug dealers.

According to Lupe, she had played a maid more than 150 times.

But at the time of our interview she was tired of complaining: She had a juicy part in "Desperate Housewives" and  preferred to talk about the roles that she was planning to do "now that things are starting to change".

Stars left out of 'In Memoriam' Oscar tribute

I am tired of complaining, too. Tired of explaining why it's so important for Latinos to see ourselves on the screen, that movies give us the chance to see ourselves as lawyers, doctors, and heroes.

That every time Latinos are acknowledged for their contribution in the media, it makes a huge impact on the dreams and aspirations of the largest minority in the country.

So while I was deeply moved to see Lupe featured in the in memoriam montage of the Screen Actors Guild Awards,  I don't understand why she wasn't included in the Oscars tribute on television. END_OF_DOCUMENT_TOKEN_TO_BE_REPLACED 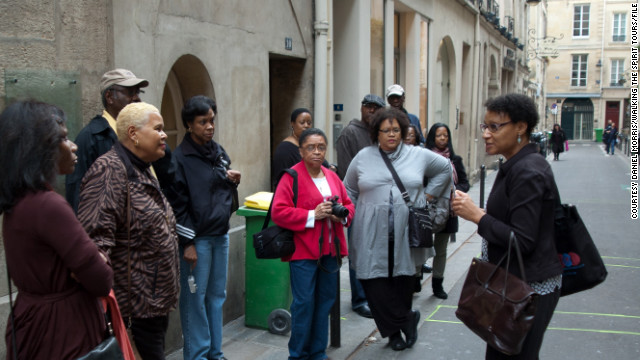 African-Americans in Paris: 'It's always been about freedom for us'

By Maureen Jenkins, Special to CNN

(CNN) - Think Paris, and the Eiffel Tower, the Champs-Élysées and haute couture come to mind. But the City of Light also is rich in African-American history. Keeping this history alive are tour companies that share it, up close and personal, with visitors to France.

From legendary entertainer Josephine Baker to internationally acclaimed artist Henry Ossawa Tanner to World War I's ragtime-and-jazz-playing "Harlem Hellfighters," Paris has embraced African-American culture like few other places. Because of that legendary embrace - one that black folks in the States had heard about since the 1800s - Paris loomed large in their imaginations. To many who didn't always feel welcome in their native country, the city sounded like a place where they could emotionally exhale.

"It's always been about freedom for us," says Marcus Bruce, the Benjamin E. Mays Professor of Religious Studies at Bates College and author of "Henry Ossawa Tanner: A Spiritual Biography."

Legendary Harlem-born author James Baldwin, who left for Paris in 1948, said "African-Americans discover in Paris the terms by which they can define themselves. It's the freedom to work beyond the assumptions of what we can and can't do as African-Americans. It's a different rhythm and pace. We can imagine ourselves in new ways in that space."

5 things you may have missed about the George Zimmerman saga

That was the day two strangers - Trayvon Martin, an unarmed black teenager walking back with Skittles and an iced tea he'd picked up at 7-Eleven, and George Zimmerman, a white Hispanic neighborhood watch volunteer in Sanford, Florida - met for the first and only time.

It's been nearly a year since Zimmerman shot Martin to death. The incident generated huge outrage across the country for months and led to a wide-ranging conversation about the state of U.S. race relations.

Zimmerman acknowledged shooting Martin but said it was in self-defense. Attorneys for Martin's family have accused Zimmerman of racially profiling Martin and shooting him "in cold blood."

Attention to the case has died down substantially in recent months, and you may have been focused on other things. Here are a few things you might not know about the case, which is scheduled for a June 10 trial.