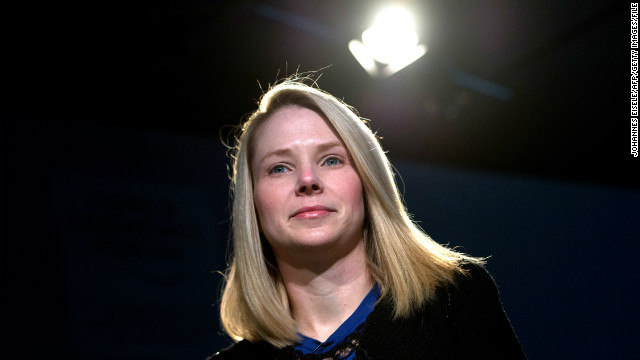 How Marissa Mayer writes her own rules

(CNN) - To become Google's first female engineer in 1999 - and, eventually, one of the most powerful women in tech - Marissa Mayer had to get comfortable with risk.

"I always did something I was a little not ready to do," she said last year while speaking on her best decisions in a talk with NPR Correspondent Laura Sydell. "That feeling at the end of the day, where you're like, 'what have I gotten myself into?' I realized that sometimes when you have that feeling and you push through it, something really great happens."

If the 37-year-old still makes career moves by her tried-and-true process, then she's likely anticipating something great to occur in her new role as Yahoo's CEO.

Mayer's hiring last summer, which accordng to Fortune made her the youngest head of a Fortune 500 company, came as a surprise, and her high-wire decisions since have spread far wider than Yahoo's campus.

First, there was her brief maternity leave after she gave birth to her son in September. When the Silicon Valley star first announced that she was pregnant, on the very same day Yahoo revealed she was the company's new CEO, some saw it as a progressive move and hoped Mayer would set a new standard for mothers trying to balance the competing demands of their corporate and familial roles.

What they saw instead was a businesswoman eager to get back in the office and who said that having a new baby in her life wasn't as difficult as she'd been told.

But the real critiques came last month when Yahoo's HR department issued an e-mail telling staff that they will no longer be able to work from home, prompting an angry backlash and leading some to question Mayer's judgment.

While some found her position just, others hoping the new mom would create a more reasonable corporate culture interpreted the move as unfair, noting that Mayer approved the edict while building a nursery next to her office - not an option for most working parents.

But over her nearly 14-year career in the tech world, Mayer has consistently shaken up expectations. If we've learned anything about this influential computer engineer-turned-corporate executive, it's that she plays the game of business by her own rules.

1. She doesn't do stereotypes

Part of the legend of Marissa Mayer is that she doesn't fit into our assumptions of what it means to be a tech geek.