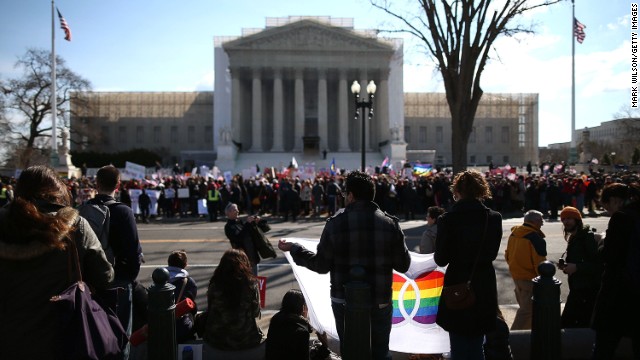 (CNN) - Two days of arguments on gay marriage at the Supreme Court ended Wednesday. The justices heard both sides in two separate cases: California's voter-approved Proposition 8, which bans same-sex marriage, and the 1996 Defense of Marriage Act, which defined marriage on a federal level as being only between a man and a woman.

It could be months before the court makes a ruling. CNN spoke with a few people who were inside the nation's highest court Wednesday or were monitoring the hearings closely from the outside. Tell us what you think in the comments below.

Jeffrey Toobin, CNN legal analyst: "I think DOMA is in trouble, and I think it's in trouble because Anthony Kennedy was repeatedly concerned that the Defense of Marriage Act violates states rights. Anthony Kennedy, who as we all know is the swing vote on this court, is someone who is concerned about gay rights, although he said very little, I think nothing, about the issue of whether the Defense of Marriage Act violated gay people's constitutional rights. He was clearly very concerned that the Defense of Marriage Act was invading the province of the states to define marriage. That's a state function, usually. And that would certainly be suggesting that he was going to strike down the law. Certainly the other liberals, the four Democratic appointees, looked like they were going to vote it down."

Edith "Edie" Windsor, plaintiff who challenged DOMA: "I am today an out lesbian, OK, who just sued the United States of America, which is kind of overwhelming for me. I think it's gonna be good."

Jonathan Turley, law professor, George Washington University: "You're seeing sort of a sticker shock with the justices, that they were worried about handing down a major ruling either recognizing same-sex marriage or the right of equality, or rejecting it."

Chad Hollowe, supporter of same-sex marriage: "It's pretty clear that some justices like (Antonin) Scalia are going to vote against it no matter what. Scalia was engaged in a long back and forth about how exactly did this become unconstitutional all of a sudden. Was this unconstitutional when the constitution was created - when the 14th amendment was passed? Was it unconstitutional 10 days ago - when did this happen? His line of questioning made it pretty clear he was dead set against it, which shouldn't be surprising, given Scalia's history."

Eric Delk, who attended court arguments Wednesday: "Well, I think that the conservative justices feel that Prop 8 is valid, but I think some of the more liberal justices know it needs to be altered. Because the people decided something different from what the courts decided and opinions have changed since the Prop 8 vote. And I think in California, if they had a vote now, they would probably allow same-sex marriage."

Mary Ann Piet, social worker: "I'm here today because I'm a social worker, and I've seen a lot of people suffer over the years. And I'm concerned about not getting people their human rights, their dignity as people. And this will give dignity and human rights to people. I have members of my family that are gay, and I see them suffer internally."

Also on this blog: A time line of gay rights in America