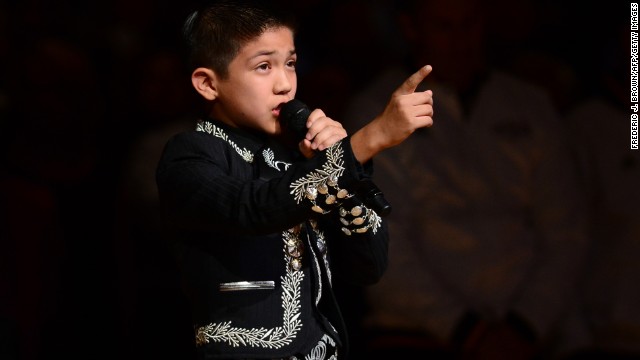 Sebastien De La Cruz sings the national anthem prior to the start of game 4 in the NBA finals between the San Antonio Spurs and the Miami Heat on June 13 in San Antonio, Texas.
June 17th, 2013
10:06 AM ET

Opinion: The mariachi singer is more American than his critics

(CNN) - The scoreboard was clear.

Winner: 11-year-old Sebastien De La Cruz, "El Charro de Oro" (the golden horseman) who became a national story after he sang the national anthem at Game 3 of the NBA playoff series between the San Antonio Spurs and Miami Heat and showed a lot of a talent, heart and class.

Losers: The haters and racists who - displaying a lot of ignorance - hid behind the anonymity of Twitter to spew venom and attack the little guy because they thought that no one dressed in a mariachi outfit was certified American enough to sing "The Star-Spangled Banner."

"Is this the American National Anthem or the Mexican Hat Dance? Get this lil kid out of here" - StevenDavid@A1R_STEVEN

What does it mean to be an American anyway?