Editor's note: What defines being black in America? Is it the color of your skin, your family, what society says or something else? Soledad O’Brien reports “Who Is Black in America?” on CNN Saturday at 8 p.m. ET/PT.

(CNN) - "Who is Black in America?" explores how color affects identity. In this video, Danielle Ayers, a biracial woman, discusses her search for identity and the challenges of being color blind after growing up in a primarily white Mennonite community where race was not discussed.

Opinion: Why I call myself black

Editor's Note: Carleen Brice is author of the novels "Children of the Waters," a story about race, identity and what really makes a family, and "Orange Mint and Honey," which was made into the television movie “Sins of the Mother." She’s working on her next novel, "Every Good Wish." Her book for writers, "The Not So Fearless Writer," is forthcoming from Agate Publishing in 2013.

By Carleen Brice, Special to CNN

(CNN) -  I have copper skin and freckles.

When I was a girl, my hair was red (which I was told came from an Irish ancestor), but as I’ve aged it has darkened to brown. I no longer straighten my hair, but when I did I was sometimes confused for a white person. I have always self-identified as black. I knew and know no other way to think of myself.

We have a mix of races on both sides of my family.

I am the daughter of a beige, straight-haired woman who in 1971 when I was 8 followed me around for weeks begging me to let her cut my hair and style it in an Afro. I am the daughter of a brown man who as a boy yelled at the movie screen for Tarzan to “get those jungle niggers,” and as a young man kept his children home from school on Malcolm X’s birthday. To my mother, black was beautiful. To my father, black was a chance to be proud. END_OF_DOCUMENT_TOKEN_TO_BE_REPLACED

Opinion: Colorism is the new "ism"

Editor’s Note: Ronald E. Hall, Ph.D. is a professor at Michigan State University and the author of "The Melanin Millennium." He has lectured on skin color both domestically and internationally, and testified as an expert witness in skin color discrimination cases. His forthcoming book is a revised edition of "The Color Complex."

(CNN) - In the early part of this century, there were separate facilities for blacks and whites, the Ku Klux Klan was a popular white supremacist organization and racism was easy to see.

In 1964, civil rights legislation outlawed racial discrimination, and there has been an advance of racial equality, including the election, and re-election of the first black president.

But while overt acts of racism have declined, discrimination continues in another form: colorism.

Colorism is a manifestation of how Western imperialism has exported European ideals, most notably the universal idealization of light skin, to American shores.

Not only have whites discriminated against blacks because of skin color, but people of color have also discriminated against one another. While colorism has existed for some time, it has only been recently acknowledged, as seen in the increase of legal cases and studies examining this “ism.” END_OF_DOCUMENT_TOKEN_TO_BE_REPLACED

Editor's note: In today’s United States, is being black determined by the color of your skin, by your family, by what society says or by something else? Soledad O’Brien reports “Who Is Black in America?” on CNN at 8 p.m. ET/PT on Sunday.

(CNN) - "Who is Black in America?" explores how color affects identity. In this video, slam poets Kai Davis, Hiwot Adilow and Telia Allmond from the Philadelphia Youth Poetry Movement perform a poem, "Team Lightskin," about their experiences growing up as light-skinned black women. 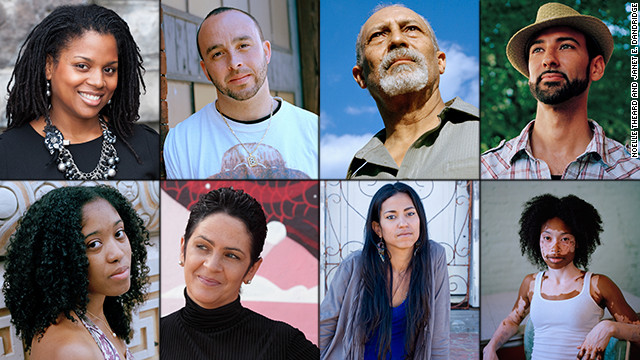 Black in America: It's not just about the color of your skin

A shade darker than brown? The opposite of white?

Who is black? In America, being black has meant having African ancestry.

But not everyone fits neatly into a prototypical model of "blackness."

Scholar Yaba Blay explores the nuances of racial identity and the influences of skin color in a project called (1)ne Drop, named after a rule in the United States that once mandated that any person with "one drop of Negro blood" was black. Based on assumptions of white purity, it reflects a history of slavery and Jim Crow segregation.

In its colloquial definition, the rule meant that a person with a black relative from five generations ago was also considered black.

One drop was codified in the 1920 Census and became pervasive as courts ruled on it as a principle of law. It was not deemed unconstitutional until 1967.

Blay, a dark-skinned daughter of Ghanian immigrants, had always been able to clearly communicate her racial identity. But she was intrigued by those whose identity was not always apparent. Her project focuses on a diverse group of people - many of whom are mixed race - who claim blackness as their identity.

That identity is expanding in America every day. Blay's intent was to spark dialogue and see the idea of being black through a whole new lens. END_OF_DOCUMENT_TOKEN_TO_BE_REPLACED

(CNN) - Seventeen-year-old Nayo Jones has chestnut colored skin and wears her curly hair in a small Afro, but she doesn't "feel black".

“I was raised up with white people, white music, white food, so it’s not something I know,” says Jones.

She sits in a circle talking about black culture and what makes someone black in 2012, surrounded by a group of diverse teens and twenty-somethings. They grew up with a biracial president who identifies as black.  They will not have to fill out a census that demands they check just one racial box. And they are part of a generation that has a growing number of mixed-race relationships and people.

In 2010, 15 % of new marriages were between people of different races or ethnicities, double the number from 1980. Also, the number of people who self-identify as mixed race is growing.

Many of the 50 or so young adults in the room view race differently from their parents, and from one another. For them, race is fluid, and they get to decide their identity. END_OF_DOCUMENT_TOKEN_TO_BE_REPLACED

Soledad O'Brien: I’m black. I’m Latina. My mom is Cuban. Afro-Cuban. My dad is white and Australian. And I think because of my job, often a question like "How do you identify?" is really not about the question. It’s always "What side are you on?" "What perspective do you bring?" END_OF_DOCUMENT_TOKEN_TO_BE_REPLACED

by Haley Draznin, Special to CNN

(CNN) - Brian Lee is a rare face in the advertising industry.

The 27-year-old assistant account executive at Wieden+Kennedy in Portland, Oregon, is one of the 7% of managers (PDF) in advertising and marketing who are black.

When Lee was looking for a way into advertising after graduating from college, he didn’t know how to get his foot in the door.

Stephens' passion to expose young black students to media led to the creation of the Marcus Graham Project, which mentors and trains youth in the skills they need to get a job at an ad agency.

"I started the Marcus Graham Project really out of a need to increase diversity in the  advertising and marketing industry," he said.

The project, named after Eddie Murphy's advertising executive character in the movie "Boomerang," began in 2007.

“He really set me up in a way that allowed me to get the foundation that I need to even be successful at Wieden+Kennedy," Lee said. "And so if it wasn’t for him, I wouldn’t be here.”

This year, Lee was a mentor and judge, joining his own mentor, Stephens, along with executives from advertising firms Publicis Kaplan Thaler and JWT at the One Club Creative Boot Camp. In the four-day competition at Morehouse College in Atlanta, students were challenged to create an ad campaign.  Winners earned a summer internship at Publicis or an invite to the Marcus Graham Project summer boot camp, where Lee got his start.

It allows Lee to pay it forward, just like Stephens did for him.

Learning the real cost of violence

Gun violence is on the rise in several American cities. Out of the nation’s 10 largest cities, Philadelphia has the highest homicide rate. This year’s death toll is up to 277.

But Scott Charles, a local educator and a trauma surgeon, has created an innovative program to save lives of potential victims even before they arrive in the operating room. CNN Correspondent Sarah Hoye has this week’s “Black in America” report, about a Philadelphia program takes youth on a journey to expose them to the real impact of gun violence.

Soledad O'Brien's documentary "Who is Black in America?" airs at 8 p.m. ET/PT on December 9 on CNN.

In October, the U.S. men's national soccer team advanced to the final stage of qualifying for the World Cup, thanks in part to a half-dozen German-born players fathered by African-American soldiers in the U.S. military.

The choice to play for the U.S. men's national soccer team rather than the German team relates not just to their parents' homelands, but to their racial identities. Soccer player Danny Williams told his parents he felt more American than German.

“When people look at me in Germany, they know that I am not 100% German," Williams says.